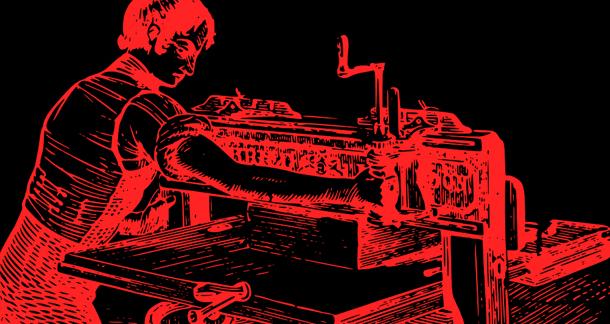 I'm a latecomer to the wonders and cheap thrills of a certain brand of horror novels. But now that I'm in, I'm ALL in.

Did I start a book club to get people to read The Nest, the first book in Grady Hendrix's Paperbacks From Hell imprint? Yes, yes I did.

Did my own sister attend? Yes. Did she read only to the point in the book where a young girl was eaten vagina-first by a mutated cockroach? Also yes.

Did the book club logo look more penis-y than I'd planned? Again, yes. I thought it would be a little penis-y, but it's VERY penis-y.

After that rousing first success, which also included meeting at a bar that has $1.50 beers for happy hour, I had to find more books. And I came across a problem. Some of the best options just aren't available. Or they're not convenient. I can't ask people to come to a book club where we read paperback horror for cheap thrills and expect them to pay ridiculous prices for books. They're called "cheap" thrills for a reason. And when you compare books to $1.50 beers? How can I convince someone to drop $60 for a vintage book when they could take 10 steps to the bar and buy 40 BEERS for the same price!

If serious, studious, literary-minded groups like mine are to thrive, some stuff needs reprinting. Think of us, publishers. Think of us, sad, a little drunk, hoping our next read will top radioactive cockroaches devouring a group of church children.

Don't you want YOUR books to be the next ones to disgust us? 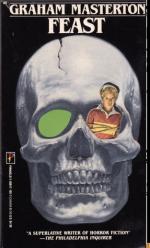 Soylent Green's Soylent Green, Demolition Man’s ratburger, Snowpiercer's gross-out grub, a surprise from Rob Hart's The Warehouse—gross eats are always a high point of disgust, and in Feast, vile dining practices hit an all new apex. Or maybe a new low. It's both, really.

This nutty little book, not available in print or digitally, needs a reprint. For fucks sake, its opening line is, “Well, then, how long do you think this baby has been dead?”

A good number of Masterton's works have digital releases, but where's Feast? Your only shot of finding this one at a reasonable price is in waiting for someone with good taste to die and then hitting up their estate sale. Otherwise, don’t count on gorging yourself on Feast anytime soon. 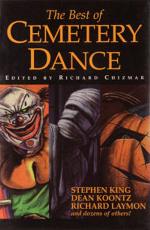 If you’re looking for some of the best short horror fiction of all time, this 800-page phone book’s got your number.

You can still find these stories collected in various forms, but damn it, we want the full-on omnibus edition. The 800-page slab, the Tombstone Edition, if you will. What’s the saying, Thick Thighs Save Lives? Well, Thick Books... Get You Looks? Lock Up Crooks? I don’t know, help me out in the comments. There’s gotta be a catchy rhyme here. The Tombstone Edition depends on it! 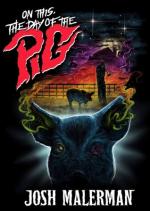 With this Bird Box business, Josh Malerman has a hot iron. My understanding of hot irons is that one has to strike while those irons remain hot. I don’t understand the whole of the analogy, I'm not a blacksmith. But blacksmiths and I have something in common: We like money, and when there's a time when money can be made, let's make that money!

I think there’s money to be made here. And just look at that cover. Isn’t that the kind of throwback we all want to see?

I understand this is a one-time printing, meant to go out of stock and drive some sales, but c’mon, ya’ll. Some of us just want to read stuff without getting into the seedy world of book collecting. Because first you're buying Malerman books on eBay, then you're scouring the Goodwill, and soon enough you're hitting up garage sales on no sleep, tearing past all the baby clothes and stupid shit like that to dig through a box of bedbug-infested paperbacks that smell like they were made of recycled cigarette butts marinated in cat piss. 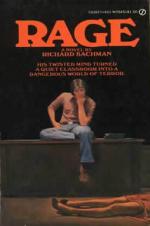 This isn’t the first time I’ve asked the question about bringing this back into print.

I get Stephen King’s position on the whole thing, and frankly it’s not like he needs the money, so why profit from something he’s not 100% behind? On the other hand, I think that there’s a dearth of good novels regarding school shootings. Whether we like it or not (that’s a stupid way to start this sentence. Who “likes” school shootings?) school shootings are a thing that happens. It seems unusual to me that this subject is as taboo as it is in fiction considering how common it is in real life, and I think that horror that goes to the taboo place can often be very effective.

Plus, the sales could go to benefit...whatever the opposite of the NRA is. The NNRA (Not National Rifle Association)?

I respect Mr. King's decision, I really do. And I want to read Rage. 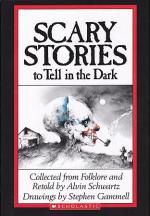 For a few years now, Marvel has started putting out Artifact Editions. These books, rather than showing the finished product, are scans of the original pages. That means you see the white-out, the tape, the word balloons, erasure marks, unused images, all that great stuff.

For too long, Scary Stories To Tell In The Dark was only in print with the Bret Helquist art. Supposedly, a restored version was released in 2017, but if you look at Amazon reviews, it’s a little unclear whether the art is truly restored to its original glory or not. About half the customers are saying they got Helquist books. It's a mystery whether that's because they bought mis-listed, used copies, or if there's something more sinister going on...

Let's see some of that Stephen Gammell art in the style of an Artifact Edition. Let's see some process. Let's see some images that didn't make the cut. We played along with the art switcheroo, we bought tickets to your stupid movie, so how's about we get a little something we ACTUALLY want? 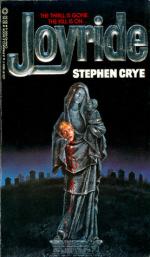 A slasher at its purest, we need more books like this. A reasonable 248 pages, a story that doesn’t waste a shitload of time getting the people to the place where the stuff happens. This is what I’m talking about.

There have been some nice entries into the sort of "cerebral" horror, the "indie" horror, and the "worth examining" horror genres lately. It Follows, Creep, Hereditary, all these sorts of things and their book equivalents. What I haven't seen in awhile is a straight-up slasher where we aren't thinking about stuff like "Who are these characters, really?" or "turning the genre on its head" or "tropes." That's good sometimes, and sometimes you just want a good ol' fashioned gravedigger terrorizing asshole teens. 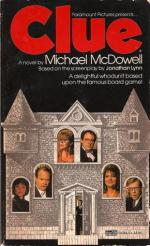 Michael McDowell wrote the movie Beetlejuice, which made him forever my hero. McDowell also wrote A TON of great horror novels. And, at some point, the novelization of the movie Clue.

Clue might be stretching the definition of “horror” novel quite a bit, but it’s one of the only McDowell book that hasn’t gotten a kindle reprint, and I'm dying to find out if it's any good.

Besides, with that new movie that looks like Clue on...well, not steroids. Not acid. It looks just like Clue, right? With that thing coming out, I don’t think I’m being obnoxious when I say that Clue and Clue-adjacent products are probably going to be at the highest peak they’ve seen for quite awhile, and I don’t think they’ll hit that high again soon. Combined with the fact that Beetlejuice is a Broadway hit, the time is right. Let's do this. 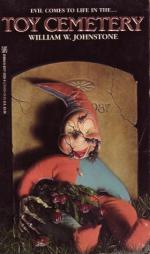 By re-release, in this case I mean an Editor’s Cut.

This book has some great shit in it. Holds barred? None. Doll people horribly mutilated, a demonic eugenics program, evil fog, incest like you wouldn't believe. A sweaty doll-maker/child molester, a spooky mental institution. By the end, this book feels like Johnstone had about 80 scraps of different horror novels and just decided to clear his docket, do them all at once in one amphetamine-fueled writing binge where it ended and he woke up with his face buried in a typewriter, a manuscript of unknown contents placed in an envelope and sealed.

Toy Cemetery is packed with a lot of nonsense that we really don’t need, characters who don’t need to be in here, plot lines that don't go anywhere, just a bunch of extra shit. This book has the potential to be one of the best, cheesiest, most exploitatively awesome horror novels of all time. But not at its current length, and not with how essentially confusing it is.

I'm game, publishers. I can cut this book down to a lean, mean, 2-hour read, no problem. Just give me some scissors. Maybe an axe.

9. "Such Nice People" by Sandra Scoppettone

How badly does this need a new cover? This cover looks like it’s going to be a romance with a lot of staring over bluffs into the sea. Don’t get me wrong, there’s a place for that. And that place is in J. Crew catalogs.

And the other cover?

C’mon. That’s not scary. That looks like the cover of a novel where a grandma solves mysteries with the aid of her cat who has a saucy name like Lord Saucington or something.

Let’s get some blood and guts in there, please. For inspiration, maybe lessons that could be learned from 80’s VHS covers. 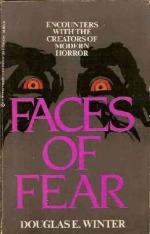 10. "Faces of Fear" by Douglas Winter

How-to-write books are great, but sometimes author interviews are better. You get some of the same information without as much prescription.

And while there are plenty of great author interview books, far too few are on the subject of horror. 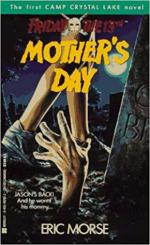 Halloween, Friday the 13th, all of these movies had companion novels, some had series that branched off the main movies, and some of them are supposed to be pretty damn good. Camp Crystal Lake: Mother's Day combines a bunch of movies, creates a tighter Jason lore, and even has portions from Jason's perspective, which isn't somewhere the movies seem to go. I'd love to give it a shot, but not for $100 dollars.

Alternatively, if you want to make a donation to the book club, I can assure you that a percentage of your donation will go to purchasing overpriced horror. Another portion will definitely go to beer, but a PORTION will benefit someone besides me and my drinking.