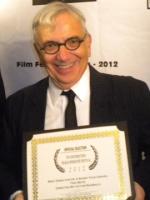 Victor Bumbalo is an award-winning playwright whose plays have been produced worldwide. He is the recipient of an Igram Merrill Award for playwriting, having made his mark with plays like Niagara Falls and What Are Tuesdays Like? which deal extensively with American societal reactions to the AIDS epidemic. Bumbalo has also written for a number of top television series, such as NYPD Blue and American Gothic. More recently, he wrote and directed a short film, Two Boys. It has appeared in many festivals throughout the United States and won the Jury Award for Best Drama at the Beverly Hills Shorts Festival.