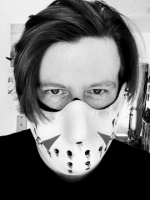 Paul Michael Anderson is the author of the collection  Bones Are Made to Be Broken, which Jack Ketchum (The Girl Next Door, The Secret Life of Souls) called “a dark carnival of rigorous intelligence and compassion, the title novella alone of which is well worth the price of admission”, as well as the novellas I Can Give You Life,  and How We Broke (with Bracken MacLeod), and dozens of short stories, articles, and reviews.  His new novella Standalone arrives in September 2020, and Stephen Graham Jones (Mongrels, The Only Good Indians) describes it as “A metaphysical science fiction slasher that doesn’t scrimp on the gore and might just get you rooting for the guy with the machete, the ax, the knife, and that certain glint in his eye that lets you know it’s all over.” You can find him on Twitter under the inspired handle @p_m_anderson, or his website thenothingspace.net.