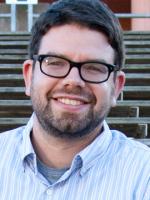 Originally from Concord, Massachusetts, Jon Korn spent a decade in Los Angeles trying to get warm. He now lives in Oakland, where he works as a writer and film festival programmer. Over the past 10 years, Jon has watched tens of thousands of movies for the Sundance Film Festival, AFI FEST, Outfest, and CineVegas, among others. Not all of them were good, but it is still a wonderful job. Jon is the co-creator of the Echo Park Time Travel Mart and a Jeopardy! champion. His hobbies include cooking, being sad about baseball, and not answering the phone.