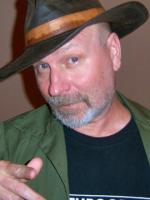 His early novels from the 1980s and 90s pioneered the graphic, subversive, high-energy form known as splatterpunk. His anthology Book of the Dead was the beginning of modern post-Romero zombie literature. His work ranges from hardcore horror to whacked-out Bizarro to scathing social satire, all brought together with his trademark cinematic pace and intimate, unflinching, unmistakable voice.

From young agitator to hilarious elder statesman, Skipp remains one of genre fiction's most colorful characters.