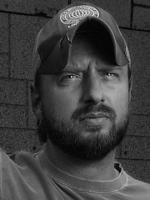 Frank Bill has been published in Granta, Playboy, Oxford American, FSG Work in Progress, New Haven Review (coming in 2012), Talking River Review, Plots With Guns, Thuglit, Beat to a Pulp and many other outlets. His first book, Crimes in Southern Indiana was released by Farrar, Straus & Giroux in September 2011 and his first novel, Donnybrook, will be released by FSG in February 2013. He is agented by Stacia Decker of Donald Maas Literary Agency.