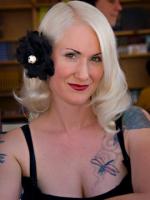 She sold her first short story when she moved to Los Angeles in the early 90s. After nearly 20 years in her beloved adopted city, she still considers herself an expat rather than a native.

Christa’s an avid reader and collector of vintage paperbacks, a film noir enthusiast and a tattooed lady. She writes primarily hardboiled crime fiction, but also does work-for-hire media tie in novels.

She's the author of a number of novels, including Money Shot, Choke Hold, and Butch Fatale, Dyke Dick.