Review by Christopher Shultz September 29, 2015
In: 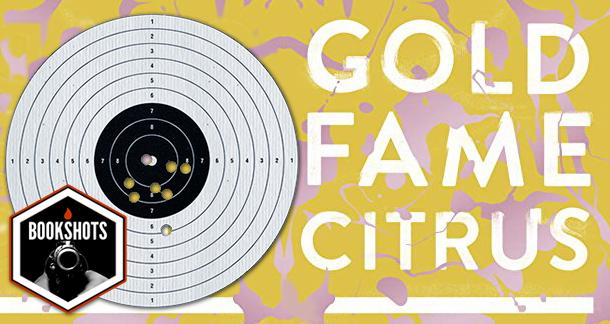 Watkins is quickly proving herself a significant author, and while this debut is a knockout, it also somehow suggests this magician's act isn't over just yet.

In this quasi-magical realism tale, Luz, a former child state icon/model, navigates the water-depleted, post-apocalyptic California coast with her partner Ray and their "child" Ig, in search of a better life.

Watkins's Battleborn (of course), Black Moon by Kenneth Calhoun and Chronic City by Jonathan Lethem (or just about anything else by him)

Luz Dunn, aka Baby Dunn, once the infant symbol of California's hopes and dreams, now dashed thanks to a mass drought that has left the state dependent on water rations from other parts of the country. After modeling her late teens and early twenties away, Luz now struggles to define herself while reconciling her past identities.

Someone who looks like Olivia Luccardi (Yara from It Follows), but who is of Hispanic descent.

One may argue we already are living there, or at least the precursor to a waterless wasteland.

Hard to decide, but ultimately I chose this one:

The prospect of Mother Nature opening her legs and inviting Los Angeles back into her ripeness was, like the disks of water shimmering in the last foothill reservoirs patrolled by the National Guard, evaporating daily.

Quick quasi-self-plugging moment: about two years ago, I wrote a news piece for LitReactor about debut writer Claire Vaye Watkins beating out two big-name authors for the Story Prize. I was instantly intrigued to know more about this upstart who trounced the competition, but like many things in life, her name and apparently stellar short fiction collection Battleborn sifted through my consciousness like flour, landing back in the hermetically-sealing jar with its almost ephemeral brethren for later consumption (or, put simply, I marked Battleborn in my Goodreads then forgot about it). But the name did stick, and when it came time to select a book for September, I quickly grabbed Watkins's debut novel.

Of course, it wasn't only the name recognition that lured me to this work. The basic premise—a character-driven, near-post-apocalyptic setting that could easily become a reality—had me sold. Now, overall I'm of the opinion that the less you know about a narrative before diving into it headfirst, the better. Sometimes this proves false, or at least inconsequential, i.e., knowing a good amount of detail concerning the story, characters and settings will not diminish the reading experience. However, with Gold Fame Citrus, the opposite holds true, due primarily to Watkins's absolutely wonderful prose, which hypnotizes and transfixes the reader from the novel's onset. She works like a magician throughout, both in the form of an entertainer devoted to trickery and sleight of hand, and in the more archaic sense of the word, a figure more akin to a sorcerer, casting spells, making the impossible possible.

This isn't to suggest that Watkins uses cheap tricks to cast a mirage of talent or storytelling prowess. Her sentences leave you feeling woozy, like a potent wine that gets you drunk off only a few sips. Her protagonist, Luz, simultaneously attracts and repels, her quest for "a better life" in actuality a desire for identity, which makes her both relatable and foreign. We understand on a basic level the choices she makes, the predicaments she finds herself in—or gets taken into by charismatic figures that can fool even the reader, until their inherent danger becomes all too apparent.

The landscape, surreal and ostensibly implausible, yet also so familiar, similarly straddles this line of relatable and foreign, a lush and populated world of Watkins's own invention, and yet distinctly our world as well, the world we know and love and often hate too, the world that beckons us like a siren, but also instills fear due to its patches of utter hostility. Taken collectively, Gold Fame Citrus is a novel of mixed feelings, unanswered questions, vicarious experience and objective ire (as when you yell at a character in a horror movie, "Don't go in there, stupid!"). Watkins is quickly proving herself a significant author, and while this debut is a knockout, it also somehow suggests this magician's act isn't over just yet.