Review by Christopher Shultz November 8, 2019
In: 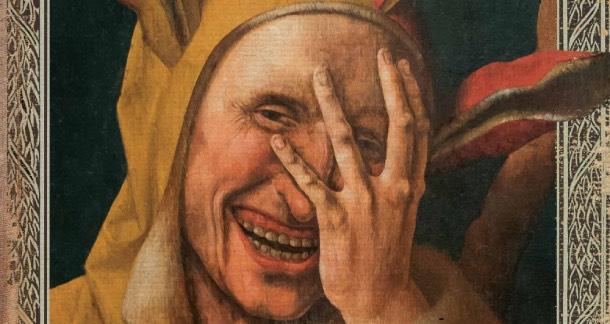 Those who have encountered Nicole Cushing's works may very well think of these three things: mentally unhinged characters; unsettling, transgressive scenarios that, depending on the reader, pick and peel at the skin of comfort zones; and extreme violence. (If you're not familiar with her, here's my LitReactor review of her Stoker Award-winning Mr. Suicide, as well as an interview with the author). With her latest book, A Sick Gray Laugh, available now via WordHorde, the latter two qualities are virtually nonexistent, while the first aspects are, to quote the novel by way of This Is Spinal Tap, "cranked up to eleven." This ratcheting up of mental instability in Cushing's protagonist makes A Sick Gray Laugh by far her most disturbing work yet.

Perhaps, as Cushing/Cashman puts it, the world we see is nothing more or less than an intense, immense, recurring nightmare.

It isn't just disturbing, though; it's also wickedly funny and insightful, both as a sociological treatise on modern times and as a history lesson of utopian cults in early 19th century Midwest America. Written in first person, the narrative follows Noelle Cashman, an award-winning author of dark, transgressive fiction, who proudly admits her books reside in "the sketchier neighborhoods of Amazon" (clearly, this is a fictionalized version of Cushing herself). After years of battling her depression and delusions, Cashman has finally decided to take "an oblong yellow pill" that levels out her mental ailments. As a result, she's become more social and active, primarily playing in casual softball leagues and running marathons. But this newfound psychological health has come with a price: whenever Cashman looks out her window, she sees a snot-like substance covering everything—houses, cars, the street, people, everything. She calls it Grayness, a disease that causes a kind of sluggish complacency in those afflicted.

Cashman thus sets out to write an epidemiological text that roots out and prescribes a cure for the illness. In her research she discovers that Grayness is a decidedly Midwest affliction that, in many ways, explains the beliefs held and behaviors demonstrated by folks in this region of the United States: the predilection toward Evangelicalism, conservatism, and spirit-crushing careers. Furthermore, Grayness formally claimed the region after the crushing failure of The New Israelites, led by a guru known only as The New Moses, a gender-neutral individual who believed covering one's face with a black veil at all times was the path to true salvation and sociological equality. The cult was unsuccessful in establishing a utopian society, which, according to Cashman, led directly to Grayness's dominance over the land The New Israelites nearly occupied. Thus, Cashman concludes, the only way to defeat Grayness is by establishing a cult with a similar ethos, namely one that conceals faces and strips identity by way of dominatrix-fueled conditioning.

What follows is best left for the reader to discover, but suffice it to say, it's a real mind-fuck (though it is worth mentioning a hilarious and uncomfortably plausible 5K marathon Cashman runs toward the end of the novel, a sequence for which the real author Cushing will no doubt be forever remembered). Thematically speaking, Cushing seems interested in the ever-blurring line between fantasy and reality and how this conversion of the real and unreal relates to madness. While The New Israelites never existed, many of the cults mentioned in A Sick Gray Laugh did—in particular, the Shakers, led by George Rapp, and the Society of Universal Friends, led by Jemima Wilkinson, AKA The Public Universal Friend. Cushing also addresses modern day issues like Trump's presidency and its bald-faced devaluing of actual facts combined with the bolstering of "alternative facts," which basically asserts that all you have to do is believe in something in order to make it true, a notion that plays into the divide between fact-based observations and faith-based beliefs. In this kind of climate, Cashman begins to believe that artifice, or simulacrum, is more pure and true than genuine articles, not because Trump is right (far from it), but simply because artifice is more "Colorful," whereas reality is all Gray.

Moreover, all this plays directly into the divide between the real person Cushing and the made-up character Cashman. Where does the author end and the character begin? Or vice versa? Is artifice-worship Nicole Cushing's true belief system, making A Sick Gray Laugh her manifesto as told by her not-quite-human avatar Noelle Cashman? Or is Cashman simply a means of venting some of Cushing's more darkly eccentric musings, without any real commitment to the Grayness-busting tenets outlined in the text? In other words, is this actually a work of non-fiction, as Cashman repeatedly insists (as though she is fighting for validation as a real, flesh-and-blood person), or is it purely a work of fiction (and possibly even, as Cashman describes, one of the author's "sick literary jokes")?

You may very well say to yourself, "Well of course it's just a work of fiction!" But can you be so sure? Many speculate we're all just living in a computer simulation anyway, which accounts for the madness and chaos in the world today. If that's the case, nothing is real, technically speaking. Perhaps, as Cushing/Cashman puts it, the world we see "is nothing more or less than an intense, immense, recurring nightmare." Are we all awake, or are we all asleep and dreaming lucidly?

These questions of existence, of insanity versus sanity and whether or not they're mutually exclusive, combined with some truly unnerving imagery, make A Sick Gray Laugh one of the most timely, head-spinning, and disturbing books to emerge this year. As other reviewers have stated elsewhere, this may very well be the work that puts Nicole Cushing on the proverbial map, outside the "sketchier neighborhoods of Amazon" and into a wider playing field—not that there's anything wrong with the underbelly of readers, of course.