Review by Christopher Shultz February 6, 2019
In: 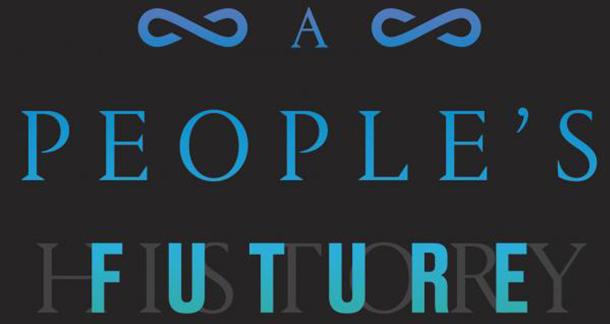 As is evident by the title of this fantastic (in at least two senses of the word) anthology, this collection of twenty-five new stories took its inspiration from Howard Zinn's seminal "outsider" tome, A People's History of the United States, which tells "America's story from the point of view of—and in the words of—America's women, factory workers, African-Americans, Native Americans, the working poor, and immigrant laborers," according to the book's jacket cover.

Victor LaValle (a name every writer should know) reprints the above description in his introduction to A People's Future, as well as a quote from its author Zinn, concerning the impact of his book: "There is no such thing as impartial history...The chief problem in historical honesty is not outright lying. It is omission or de-emphasis of important data."

LaValle goes on to state that A People's Future is "important speculative data" (emphasis mine), a "portrait of this country as it might become." Elsewhere in this introduction, LaValle describes the stories within the anthology as imagining "the years, decades, even the centuries, to come...told by those, and/or about those, who history often sees fit to forget."

A sobering and enlightening glimpse into the tension, division, opposition, and terror characterizing the last few years...as well as, most likely, all the years to come.

Given all this, one might assume each tale exists as a separate, standalone view into the possible outcome of the United State's current socio-political climate. And indeed, there are no recurring characters or governmental entities found in A People's Future; each entry is an original work from its author, unrelated to its brethren. And yet, despite each writer working independently from one another, there is a sense they were, in fact, working from the same literary equivalent of a show bible, or a predetermined world-building script.

This unintentional interconnectivity is due in part to several of the authors including imagined actualizations of preexisting tech—Tananarive Due's "Attachment Disorder," Violet Allen's "The Synapse Will Free Us From Ourselves," and Hugh Howey's "No Algorithms In The World," for instance, all make heavy use of HoloLens-type technology (holographic text and imagery appearing directly in front of one's vision)—but it is each writer's reliance upon shared themes of dystopia, resistance, and hope that truly unite each story in A People's Future. From the nightmare America that monitors and punishes both homosexuality and neurodivergence in "Our Aim Is Not To Die" by A. Merc Rustad, to the band of freedom fighters supplying the populace with contraceptives while slowly disempowering the hypocritical patriarchy in "Calendar Girls" by Justina Ireland, to a group of minorities forming their own tolerant society in the face of intolerance in "Harmony" by Seanan McGuire, each story presents readers with a society aimed at further disenfranchising an already marginalized people, and what those people do to fight back.

Sometimes the results are bleak—in the aforementioned "Attachment Disorder," for instance, Due gives us characters who would rather face potential death on their own terms than trust a government commonly known to lie and trick people of color; while in "The Sun In Exile," Catherynne M. Valente explores the terrifying nadir of personality cults and blind faith in despots; and in "The Wall," Lizz Huerta states that "hardness runs deep in those who rise up to lead," showing us that, even though the cause may be just, difficult and heartbreaking decisions must sometimes be made. But optimism runs deep throughout most of the stories contained in this volume, and many of them are downright hilarious and/or charming, especially the opening tale, "The Bookstore At The End Of America" by Charlie Jane Anders, "By His Bootstraps" by Ashok K. Banker—the only story to feature a fictionalized Trump—and even Valente's "The Sun In Exile," its dark stinger of an ending notwithstanding.

Adding to A People's Future's sense of unity is the placement of stories. LaValle and co-editor John Joseph Adams (best known for his magazines Lightspeed and Nightmare, as well as numerous other anthologies) do a superb job of varying length, tone, and tempo in a way that is neither jarring nor too safe and predictable. Dark stories seamlessly segue into more hopeful narratives; comedy and drama coexist, sometimes within the same tale. Moreover, while the stories do not unfold in a strictly linear fashion (which would be impossible), we do get a general sense of beginning in the not-too-distant future and traveling further and further into the decades, the millenniums, the eons, giving the anthology a narrative arc closer to a novel than a collection of disparate stories. The final entry, "Now Wait For This Week" by Alice Sola Kim, brings this loose "narrative" back around to the beginning: it could either be set in present day or in the distant future (there are no concrete signifiers one way or another), and it involves a time loop, perfectly encapsulating our current cyclical "bad news cycle" as well as the cyclical nature of history, how history tends to repeat itself. Repetition might be inevitable, Kim seems to argue, but this is only detrimental if we choose not to learn and reinvent the cycles in which we constantly find ourselves.

This is a perfect end to A People's Future, and a testament to its ability to be both timely and timeless. It is a sobering and enlightening glimpse into the tension, division, opposition, and terror characterizing the last few years, the last several years, the last hundreds of years, as well as, most likely, all the years to come (note too the quasi-broken infinity symbols on the cover). As McGuire writes in her not-quite-utopian "Harmony":

Court cases and successful bills and a hundred small victories had come together to usher in a world where hate was no longer acceptable, where sexual orientation wasn't enough to deny a person the right to live their life as they saw fit, where identity was up to the individual and not a government agency. But none of those things could change the nature of the human heart, and it was the nature of humans to be cruel to things they didn't understand, or approve of, or believe in.

The solution to this potential certainty, according to LaValle, Adams, and all the authors presented here, is not apathy, however. Some humans may forever be marred with an inclination toward hate in all its shades, but it is the responsibility of the other side, those who believe in equality, to continue the good fight, in both small and large ways. A People's Future features representations of these myriad means of resistance (as well as, naturally, that other, deeply important form of representation), making it not only an essential read for these current troubled times, but for all those troubled times yet to come.

A People's Future Of The United States is available now through Penguin Random House.