Podcast by Joshua Chaplinsky October 4, 2021
In: 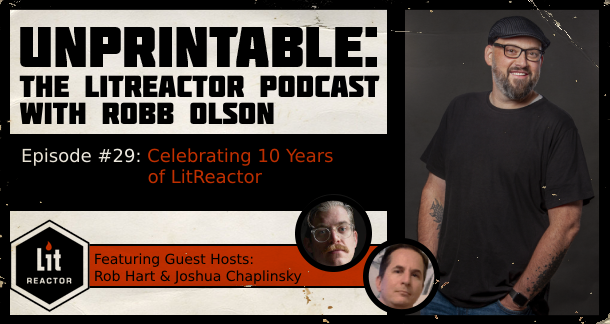 Every episode, Unprintable will take a thoughtful look at books, the publishing industry, reading, writing, and more; featuring your host Robb Olson, as well as the know-it-all geekery of LitReactor Class Director Rob Hart and Managing Editor Joshua Chaplinsky.

This is a special episode of Unprintable.

I know we said that last episode, waaaaay back in April of 2016, before we went on indefinite hiatus, but trust us—this time, we mean it.

The reasons for this are two-fold.

Number one: this is a bit of a rebranding, a reboot if you will. We are relaunching Unprintable with a brand new host: the inimitable Robb Olson, formerly of the very popular podcast, BOOKED.

Number two: the topic of discussion this episode will be none other than the 10th Anniversary of LitReactor! That's right, LitReactor has been around an entire decade, and the three of us dive deep into our once and short-lived rivalry, our hopes and dreams for the podcast future, and our favorite LitReactor memories. You can even expect heartfelt messages from a special guest or five.

As usual, if you've got any questions, comments, criticisms, or suggestions, you can email us at podcast@litreactor.com.

Your Hosts This Episode:

Robb Olson was one of the creators and hosts of the podcast Booked., a literary podcast of book reviews and author interviews. He was an editor and publisher of The Booked Anthology. He briefly wrote a horror TV column for This Is Horror, and guested on the This is Horror podcast several times, as well as one time on Unprintable - the LitReactor podcast, for which he is now the permanent host.