You Won't Believe What A Federal Judge Has Ruled In The Sherlock Holmes Rights Case... 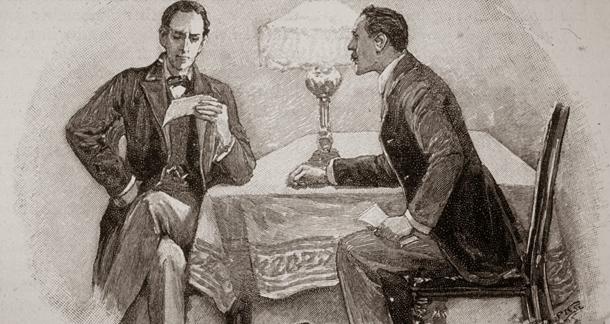 Did my attempt to write a pointlessly hyperbolic Upworthy-style headline get you to click on this story? I hope so!

Anyway. A federal judge has ruled that the character of Sherlock Holmes is officially in the public domain in the United States. Specifically, Sir Arthur Conan Doyle's stories published before Jan. 1, 1923 are no longer protected by copyright law, and the details contained in those stories can be used without paying a licensing fee to Doyle's estate.

That doesn't cover all of Doyle's stories. There were 10 published after 1923, and the details in those stories, like Watson playing rugby, are still protected. But the broad strokes—Holmes, Watson, 221B Baker Street, and Professor Moriarty—are fair game.

More from the New York Times:

The ruling came in response to a civil complaint filed in February by Leslie S. Klinger, the editor of the three-volume, nearly 3,000-page The Complete Annotated Sherlock Holmes and a number of other Holmes-related books. The complaint stemmed from In the Company of Sherlock Holmes, a collection of new Holmes stories written by different authors and edited by Mr. Klinger and Laurie R. King, herself the author of a mystery series featuring Mary Russell, Holmes’s wife.

Mr. Klinger and Ms. King had paid a $5,000 licensing fee for a previous Holmes-inspired collection. But in the complaint, Mr. Klinger said that the publisher of In the Company of Sherlock Holmes, Pegasus Books, had declined to go forward after receiving a letter from the Conan Doyle Estate Ltd., a business entity organized in Britain, suggesting the estate would prevent the new book from being sold by Amazon, Barnes & Noble and “similar retailers” unless it received another fee.

Chief Judge Rubén Castillo of the United States District Court of the Northern District of Illinois, Eastern Division, rejected the estate’s claim that the characters and the basic Holmes storyline themselves remain under copyright, since they were not truly completed until Conan Doyle stopped writing.

While it's generally accepted that Holmes is public domain in the United Kingdom, questions of the rights in the United States have generally been met with a shrug. This decision brings a little more certainty to the legal quagmire, though the Doyle estate is exploring opportunities for an appeal.

In other Holmes-related news, the third season of the very excellent Sherlock will kick off Jan. 1 in the UK and Jan. 19 in the United States. The first two seasons are streaming on Netflix. It you like things that are awesome, they're totally worth your time.

You totally got me with that headline. I am ashamed.

Class Director
Rob from New York City is reading at a fast enough pace it would be cumbersome to update this December 27, 2013 - 8:39pm

"Pointlessly hyperbolic Upworthy-style headline"  You hit that nail on the head.

i have seen a couple articles about this but no one really seems to detail what to me is an abuse of license agreements to absolve the public domain status of works like Holmes and other works.

It's odd that the estate didnt try to claim any sort of trademark, i thought it may be due to the fact that Holmes was so popular it spawned many Holmes-like arm chair detectives and so that is considered to be what is called a "Stock" character. But another stock character is Tom Swift who most definitely is under trademark, Also the Tarzan stories. Both of those series of books are in the public domain, but still under trademark. The more likely problem may have to do with the number of stories by other publishers/authors who derived new stories for Holmes when it first went into the public domain. The estate would have to prove that it's reprints and officially okayed new material was recognized by the public as the sole source for new and old Holmes material.

It's odd that none of the stories really talk about the scope of license agreements, very long legal documents which for all the general public knows has a line or two about consenting to lab experiments while being unconscious if you read a file or use an application. These licenses should not be so overreaching as to render established things such as public domain laws, as well as others, ineffective.