We Can Go Three Times As High: Reading Rainbow Is Growing! 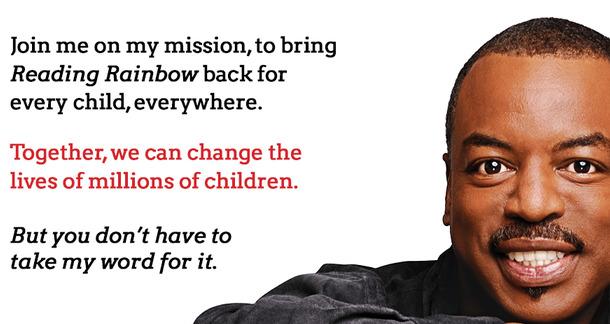 Take a look, it's in a book. And pretty soon it'll be just about everywhere.

LeVar Burton and the Reading Rainbow crew launched a Kickstarter just a couple days ago with the goal of raising a million bucks. As of today, they've raised almost three times that amount with plenty of time left to spare.

The plan is to expand the current Reading Rainbow app to include a robust online version and a ton of classroom materials.

Reading Rainbow, the beloved children's program, went off the air in 2009 after a 26-year run. The reason? John Grant, who was in charge of content at Reading Rainbow's home station, explained that literacy initiatives were changing under the Bush administration. Reading Rainbow tried to foster a love of books, but the Department of Education felt, at that time, that kids needed more basics. Phonics, spelling, stuff like that.

It's not too late to kick in, and the tip-top incentive, available to a donor who forks over $10,000, includes the once-in-a-lifetime opportunity to meet Mr. Burton and wear the genuine Star Trek The Next Generation Geordi La Forge visor.

It's pretty amusing singing the first line, with the beginning of the second paragraph to that shows tune. Or maybe I'm just weird.

TV has a habit of cancelling good shows.:/

Shannon Barber from Seattle is reading Paradoxia: A Predators Diary by Lydia Lunch May 30, 2014 - 5:36pm

The reaction video he posted after raising a million dollars punched me right in my feelings.