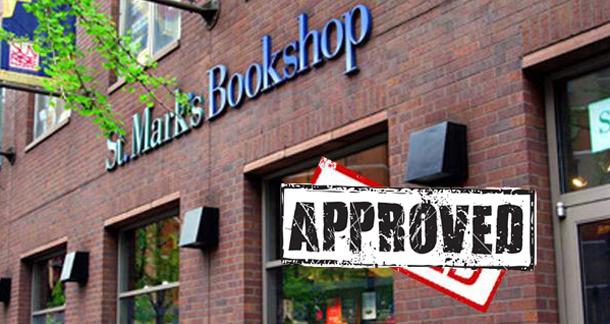 It's hard out there for independent bookstores. Last week we lamented the fact that St. Mark's Bookshop--after requesting a reduction in rent--had been summarily denied by the building's landlord.

The community rallied hard around the store, generating a petition that's produced 44,075 signatures to date, and drawing the likes of Michael Moore into the fight. The landlord, Cooper Union, claimed they too were struggling when they denied the rent break.

Credit goes to Manhattan Borough President Scott Stringer, who brought both sides to the table to hammer out a deal.

Jamshed Bharucha, the president of Cooper Union, said this gives the bookstore a chance to come up with a business plan that will allow them to stay open (but he also made clear that the gravy train isn't making any more stops):

"Despite our constraints, we felt it was important to help them because of what their presence means to our community. The relief that we’re providing is so that the bookstore can come up with a viable and sustainable business plan not dependent on further subsidies."

So yea, every little bit helps, but this doesn't mean they're in the clear. The best way to support the St. Mark's Bookstore at this point? Go there and buy a book.

Glad to hear it. St Mark's is my favorite NY bookshop. :3

misskokamon from San Francisco is reading The Moonlit Mind November 3, 2011 - 10:35am

So glad another bookstore is staying open! This article brightened my morning. So did the mysterious pile of donuts left on the kitchen table at work.

Dwayne from Cincinnati, Ohio (suburbs) is reading books that rotate to often to keep this updated November 3, 2011 - 8:33pm

I'm not familar with St. Mark's, but doesn't them staying open contribute to a market that makes it slightly harder for new authors to break into writing?