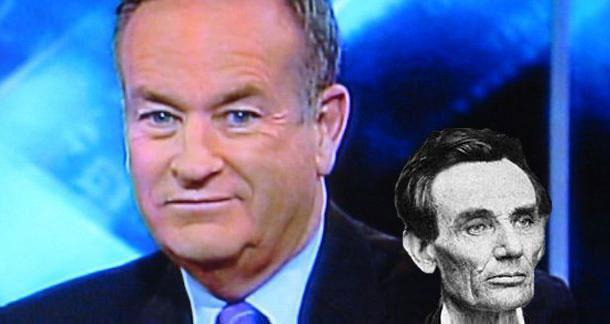 O'Reilly has responded to Emerson’s allegations about the book’s mistakes, saying there are only four errors to be found in Lincoln — and two of those are typos. He also lauded his own success by saying, “...there are now more than 1 million copies of ‘Killing Lincoln’ in print, and the book continues to sell briskly... We well understand our enemies are full of rage at our success.”

As for Emerson, O’Reilly has invited her to make an appearance on his show. “I would love to talk with her."

Fox News pundit Bill O'Reilly has, from time to time, been accused of manipulating facts to suit his arguments.

Now it seems as though his new book, a historical narrative about the assassination of Abraham Lincoln, does the same thing. That, or it's just the victim of some very sloppy research.

Killing Lincoln, which O'Reilly co-authored with Martin Dugard, is full of factual inaccuracies, according the National Parks Service. So much so, that they're banning it from being sold in the Ford's Theater bookstore.

Some of the issues are just silly. O'Reilly claims Ford's Theater burned down in 1863, when it actually happened in 1862. And the book makes numerous references to Lincoln in the Oval Office--which wasn't built until the Taft administration, decades later.

But it goes deeper than that. Jackie Hogan of The Christian Science Monitor says the book whitewashes the negative aspects of Lincoln's presidency in order to tell a more favorable story. She also calls the book "sensationalized, suggestive, and overly simplistic."

Lincoln is one of two presidents (the other being Reagan) that the Republicans point to when they want to dispel the notion that they're in it for the Money and not for the People. So I can see why a guy who carries the party's water (O'Reilly) would want to paint a favorable portrait of Lincoln. But, really?

As former U.S. Senator Daniel Patrick Moynihan famously said, "Everyone is entitled to his own opinion, but not his own facts."

Good one, Rob. It just hit me. Why don't you or LitReactor try contacting him, to see if a LR spokesperson can go on his show to challenge his facts? That may sound out there, but he's quite open to legitimate debaters doing that -I bet you he would accept, if of course the proposoal was presented in a professional way. Why not? I say go for it. That would be great.

Class Director
Rob from New York City is reading at a fast enough pace it would be cumbersome to update this November 14, 2011 - 9:49pm

A friend of mine, back from my journalism days, went on O'Reilly. He said the key is to make your argument and present it in a measured, respectful manner. He will acknowledge that you know what you're talking about (even if he won't agree with you) and it won't get out of hand--worked for my friend. Dude thrives on confrontation.

I would love to see that though. Me or any of the news team here - on some fancy show with "LitReactor Correspondent" underneath.

Joshua Chaplinsky from New York is reading a lot more during the quarantine November 14, 2011 - 10:31pm

I once worked a job where we played softball against the Fox News team. O'Reilly was a no show.

Rob W. Hart, LitReactor Correspondent. Yeah I like that.

Joshua Chaplinsky from New York is reading a lot more during the quarantine November 16, 2011 - 6:06am

They did at the time. I know there is a joke in there somewhere, but it eludes me.

@Josh: How about "O'Reilly would have shown up to play, if only he had some balls"?

@Rob -Thanks for the update!

Joshua Chaplinsky from New York is reading a lot more during the quarantine November 16, 2011 - 7:46pm