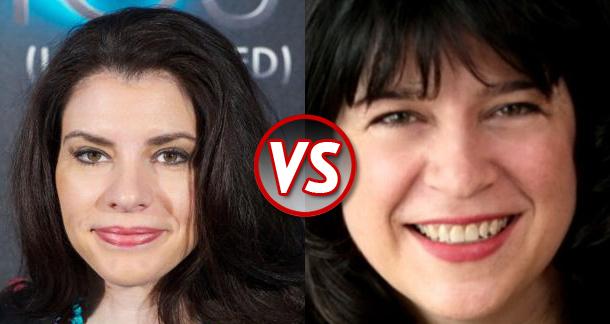 In case there's someone out there who still doesn't know the backstory, 50 Shades spawned from Meyer's Twilight series as fan fiction. Substitute Christian and Anastasia for Edward and Bella and you have a pretty good idea of the sexual subtext James reads into those characters' relationship.

Not so! says Meyer. In an interview with The Guardian, the author states that she would never even read 50 Shades:

It’s so not my genre. Erotica is not something I read. I don’t even read romance…It’s too smutty. There’s a reason my books have a lot of innocence. That’s the sort of world I live in.

That 'innocence' refers to Edward and Bella's sex-free relationship prior to getting married, as well as overarching ideas toward love that, Meyer feels, is the exact opposite of the views expressed in James' work:

These disapproving words contrast opinions expressed one year ago, when Meyer was supportive of James and the story she told. James has yet to respond to Meyers' criticism.

Is it possible Meyer was taken out if context? She's certainly entitled to her opinion, and much worse has been said about 50 Shades. Could this potentially alienate fans?

She won't read it? Hell, when I construct character relationships in my stories, I do so with the fanfic writer in mind! I WANT to read fanfics fans of my future series would write, smutty* and not. (But especially smutty. I think I'd get the best laugh out of those ones.)

*Since I mainly write YA, I wouldn't approve of smut written with underage persons. But, heck, set them up in an alternative universe where they're of legal age, and have at it, future readers and aspiring writers.

I feel like this comment is going to come back to haunt me some time in my future.

I think if you openly admit that your work is inspired by the characters and stories of another author, you've got to expect that author to have an opinion. With Meyer's background and more recent interviews I'm not surprised she dislikes it (though I laugh at her saying she doesn't read romance--Twilight is most definitely romance, though perhaps less "smutty").

With Meyers feeling so strongly about chastity and no sex before marriage, and that being a theme in her books, she may feel obligated to say she isn't supportive of this spin off that has a vastly different world view.

Keep writing, all! These kind of literary feuds are always fun! And remember, it doesn't matter who wins or loses... the bottom line is you've both won. You've got your words out there to millions, not to mention you can buy schmucks like me about a thousand times over. (Speaking of which, rent's coming up and... etc.) :)

I continue to be shocked that there's not any sort of IP blowback with 50 Shades when James has been so up front about its genesis in Meyer's world. I'm not at all surprised that Meyer hasn't read these books, nor that she's not into "smut" (a mom word if ever there was one). It's clear Meyer doesn't do a lot of genre reading: she's openly admitted that she doesn't read vampire stories or horror, either.

This mildly creepy statement by Meyer pretty much sums up Twilight, and what many people find so disturbing about it, given its impressionable teen fan base:

She's LDS, so I'm not surprised. One of my closest friends is Mormon and she has a similar ideology. She is willing to sacrafice her own happiness for love. I'm too much of a feminist bitch to embrace that line of thinking. Hurt yourself? Make the person happy at your own expense? Pardon? No. Fuck that.

Dwayne from Cincinnati, Ohio (suburbs) is reading books that rotate to often to keep this updated March 14, 2013 - 11:38pm

Both are just gross. One has a young woman in a fetish relationship with a billionaire, the other a woman who debates if she is saving herself for necrophilia or bestiality.

I was surprised Ms Meyer, who I understood to be of the Mormon faith,  didn't try to keep the other books (which are apparently 89% alike when run through a plagiarism program, yikes) from being published. I guess it wasn't worth the time and money and emotional energy. But she helped set a rather dangerous precedent that could allow others who play in fanfic to publish their stuff, just by changing a very few things. Ugh, all of this feels sort of like hanging out in the gutter. I wish a really well written book could get HALF the attention both of these series have.

SammyB, that is the worst thing, the probably most lasting thing in these books. They both spit in the eye, dance on the grave, and other things I could think of were I not so cranky, of every woman who went through hell so that I can vote. Or own land. Or any of the things too many women take for granted these days. We had tough, awesome, smart, brave women who should be our heroes. Instead, women are now looking for sick bastards... well, Duggar is a name that comes to mind, all Duggar women are sad little Hellas, aren't they? Ugh, I need something edifying, asap!!

Dwayne from Cincinnati, Ohio (suburbs) is reading books that rotate to often to keep this updated November 11, 2015 - 4:12pm

Well, no. They aren't really hurting anyone and didn't ask to be heroes. They put out some entertainment. Others bought their books, watched their shows, or whatever. Other people put them on a pedestal and got WAY too into them. The problem is the audience.