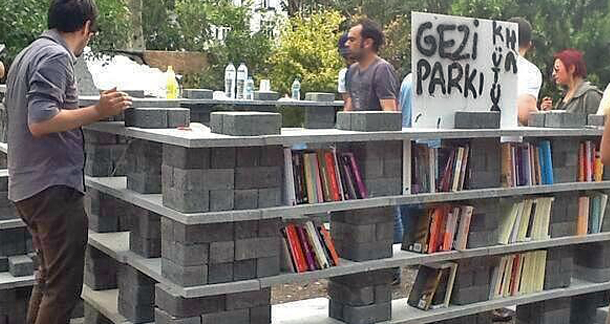 If you’ve followed the Occupy movement at all, you've probably heard about The People’s Library of donated books established in New York’s Liberty Plaza. Well, in an echo of this, publishers in Turkey have established a ‘library’ in Istanbul’s Gezi Park, where protests against the “decimation” of the park began.

Led by Sel Publishing House, a publisher charged with obscenity last year for publishing William Burroughs and Chuck Palahniuk, 15 publishing houses have contributed to the library so far. And according to Turkey’s English language newspaper, Hurriyet Daily News:

One of the major acts of resistance for protesters occupying Taksim Gezi Park has been to pick up a good book and read it – preferably in front of a police officer…Sel Publishing House on June 4 called on other publishing houses to step up the organization of the book aid by creating a makeshift library in the park, asking all publishers to send books and support the movement with some good literature.

Here’s hoping it doesn’t come to the same end as The People’s Library, which was destroyed by police in 2011. I’m particularly fond of the quote from Sel Publishing: “Books are one of the essentials of the resistance.”

Books have been a means of spreading radical ideas (and not so radical, of course) for hundreds of years, so is it surprising they continue to be a force for change? I don’t think so.

thank you for your interest on gezi park library. i hope you guys following about the resistence in there also.