The Writers Guild of America East joins #OccupyWallSt: The Writers are Coming! 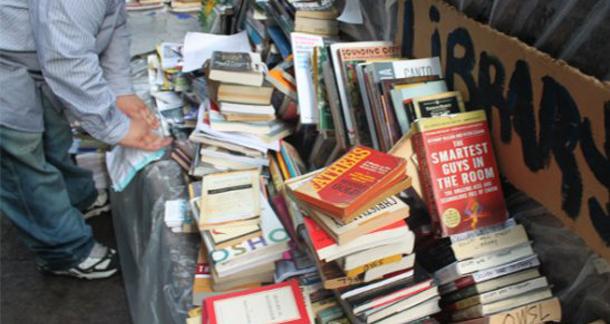 By now--unless you are indeed nose deep in books as you should and are therefore wonderfully and admirably oblivious--you've heard about the protests in NYC and across the country, dubbed Occupy Wall Street. To hash this out politically on a literature website is some futility exercise but I will say: Avast, hippies! The Writers are coming! The Writers are coming! Says Lowell Peterson, The Writer's Guild of America East's Executive Director:

We are proud to join the Occupy Wall Street protests to hold Wall Street and corporate America accountable for the financial crisis and growing economic inequality in our country.  Occupy Wall Street shows that people don’t have to sit on the sidelines.  Like the other labor unions that are participating in these protests, WGAE advocates on behalf of its members to insure they receive appropriate compensation and benefits.  No union can do this in a vacuum.  The economic crisis affects everyone.

Perhaps now there will be some sense and well-worded statements on their behalf. To say that the protest hasn't gone so smoothly thus far is an amusing understatement; for every momma's trust fund nudnik sullenly sitting in the park, having pizza delivered gratis, enjoying a free Radiohead concert, and like, totally protesting their inhumane treatment by the "banksters" who likely employ the parents furnishing said funds, there are people who've been unable to find work, have been directly effected by those at the helm of the astonishing shitshow that is American economics, know that this is bullshit, are exercising their right to peaceful protest, and in return are getting maced right in the damn face by the NYPD.

Their organization as a group leaves more than little to be desired--what do ya'll want, anyway? Issue your demands and know that it is your job to turn the police onto your cause if you want it to work--but goddamnit if some of these hippies aren't our people: they've got themselves a library! We understand priorities, am I right? Except they don't need any of your 18th edition Stephen King, plebian. Speaking for the ersatz library, Mandy Simmons clarifies their call to arms: "We need as many copies of A People's History of the United States by [Howard] Zinn as possible. We simply can't keep a copy in stock as there are so many people who want to read it."

More info about the WGA joining the protest, and how you can get involved, can be found here via the ever vigilant Galley Cat. Read more about The People's Library at their site.

EricMBacon from Vermont is reading The Autobiography of a Corpse October 5, 2011 - 12:22pm

Great article! Wish I was there. Maybe I will take some time and go down myself soon. It's is too important not to be aware and participatory during this moment, or ever really.

So do they have Guild thugs? And if so, what do they look like? Tweed jackets and corduroy pants. Calf-length skirts and cardigans. Horned-rimmed glasses and wielding brass keyboards.

I'm in full support of tweed, cardigans, and horned glasses forever, but: where will the djembes go? You can't get progress without a djembe to count out the protestational beat, brother man!

Joshua Chaplinsky from New York is reading a lot more during the quarantine October 5, 2011 - 1:00pm

I was there and saw that girl get maced. I wasn't actually protesting, though. I was trying to see a damn movie and wound up in the middle of a riot!

Joshua Chaplinsky from New York is reading a lot more during the quarantine October 5, 2011 - 2:58pm

To be fair, it's questionable whether she deserved it, but there were plenty of agitators out there cruisin' for a bruisin'.

When I hear 'cruisin'' I think of how Josh likes to spend his weekends. Joshua Chaplinsky from New York is reading a lot more during the quarantine October 5, 2011 - 3:33pm