'The Sound And The Fury' Makeover: Faulkner's True Colors Edition 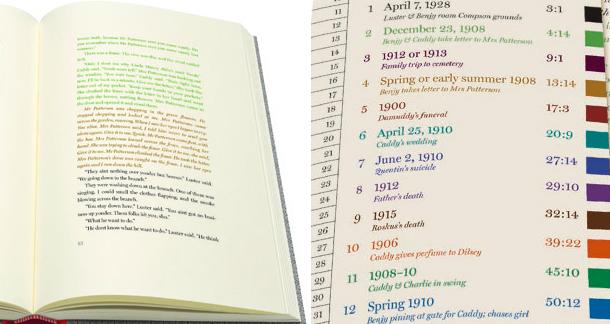 Did you find it tough to keep up with the shifts in time and viewpoint in The Sound And The Fury? Don't feel bad; even the most erudite readers are challenged by the book. Heck, even William Faulkner himself figured it might be a bit much. He claimed his classic was "a real son-of-a-bitch" and wanted to make the narrative clearer by using color-coded inks to denote shifts in time. He settled for italics, but said, "I wish publishing was advanced enough to use colored ink ... I'll just have to save the idea until publishing grows up."

Fifty years after Faulkner's death, publishing has finally grown up enough to fulfill his vision for the book. The Folio Society called in Faulkner scholars Stephen Ross and Noel Polk to identify each period and divide the text. They found fourteen distinct time levels in Benjy's section, each of which was given its own color, but declined to apply the same technique to the rest of the book, saying the other sections "defied that kind of unravelling."

The kinder, gentler The Sound And The Fury also comes with a 232-page commentary book by the scholars who worked on the project. The bad news? Thanks to a limited run of 1,480 copies, the special edition costs $345. More than 1,000 were sold during the book's presale.

Have you read The Sound And The Fury? Do you think color-coding to help the reader determine chronology will make it more accessible?

Image via The Folio Society

I very much WANT.

Jane Wiseman from living outside of Albuquerque/in Minneapolis is reading Look to Windward by Iain M. Banks July 9, 2012 - 5:17pm

Love that novel, and I guess color-coding could help, but for far less than $300+, you can figure it out for yourself. For nothing, in fact. And they just wimped out on those other sections!

This would have been a big help when I was taking a course on Faulkner last summer. His works are very challenging and frustrating. Though, this book produced one of my all time favorite characters: Quentin. I just loved him to bits and was happy to have him in Absalom, Absalom! Too bad a copy of this is so expensive.

If ever an edition screamed for an electronic edition, this is it. C'mon, Noel! Put that epub out!

Well I ordered one because fuck everybody else. I've wanted someone to do this for a few years.