Teleport Us: LitReactor's Sci-Fi Writing Challenge Is Open For Submissions 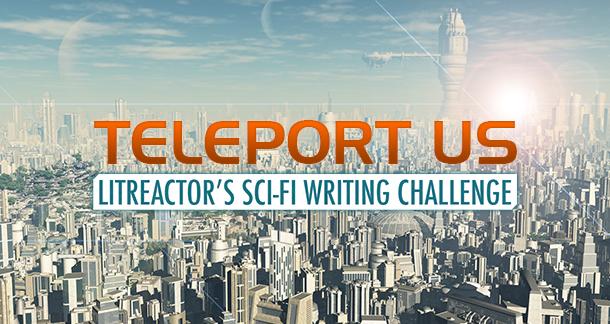 The time is upon us! LitReactor's sci-fi writing challenge, Teleport Us, is open for submissions! You can learn more about the challenge by reading the announcement post, but to recap:

Just like our horror challenge, the sci-fi challenge is a free, public contest. Anyone can submit. Also, anyone can read and rate stories, and offer comments and criticism. It's designed to develop new and exciting stories for readers, while pushing writers out of their comfort zones and into new territories.

But we're not exactly making it easy. After all, it is a challenge.

Again, here's the run of show:

Our Defender of the People, Jessica Taylor, will help us report on this event, so expect to hear updates on how things are going. We have also gone and set up a discussion thread where you can chime in and ask questions.

Now the fun part. The top-rated stories will be selected to win prizes, as well as critiques from some very talented authors. We're not announcing all the prizes and readers today—but we do want to introduce our first four readers! Without further ado, here's who's going to be reading the top-rated stories, as voted on by you:

Chuck Wendig is the author of Blackbirds, Mockingbird, Double Dead, Bait Dog, and Dinocalypse Now. He currently has 178 more novels in development. His website contains a full metric ton of writing advice, much of which will be collected and published by Writers Digest as The Kick-Ass Writer: 1001 Ways to Write Great Fiction, Get Published, and Earn Your Audience.

Adam Christopher is a novelist and Sir Julius Vogel Award-winning editor, and is the author of Empire State, Seven Wonders, and The Age Atomic from Angry Robot, and the forthcoming Shadow's Call from Tor Books. Adam’s fiction has appeared in Pantechnicon, Hub, and Dark Fiction Magazine, and when not writing he can be found drinking tea and obsessing over comics.

Kat Howard is a fiction writer, blogger, editor, and the instructor of our recurring sci-fi & fantasy class. Her short fiction has been performed on NPR as part of Selected Shorts, and has appeared in Lightspeed, Subterranean, and the anthology Stories, edited by Neil Gaiman and Al Sarrantonio. Her nonfiction has appeared on Tor.com, and is frequently on Fantasy-Matters.com, where she is also the content editor.

Joseph Nassise is the author of more than a dozen novels, including the internationally bestselling Templar Chronicles series. He also teaches courses at LitReactor on eBooks and urban fantasy. His work has been nominated for both the Bram Stoker Award and the International Horror Guild Award, and he served two terms as president of the Horror Writers Association.

The Dark Stories Dark Writers Tell in the Dark

Andrez Bergen from Melbourne, Australia + Tokyo, Japan is reading 'The Spirit' by Will Eisner February 6, 2013 - 2:29pm

Is there a prefered file format, font, and line spacing for the submission?

Class Director
Rob from New York City is reading at a fast enough pace it would be cumbersome to update this February 10, 2013 - 7:04pm