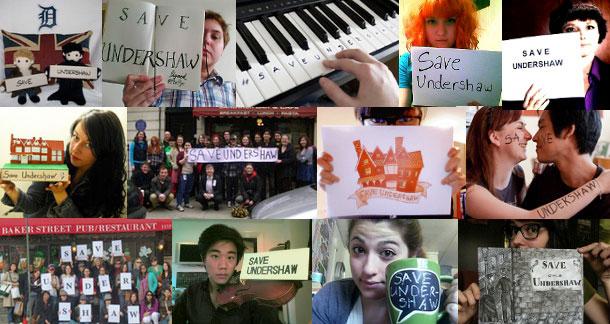 You know that heartwarming movie plot where the family home is about to be taken over by the bad guys but the gang knows there just has to be a way to foil the dastardly plans? Then there's a last-minute victory and everybody cheers while upbeat music plays? Yeah, that just happened in England. A High Court ruled today that a plan to redevelop Sir Arthur Conan Doyle's home into flats and townhomes cannot move forward. (In my mind, the upbeat music in the court scene was Erasure's "A Little Respect," but substitute your own Brit pop if you like.)

The house in question was Undershaw, where Conan Doyle lived from 1897 to 1907. Where he wrote thirteen Sherlock Holmes stories, including Hound Of The Baskervilles. Where he had tea with Bram Stoker, Virginia Woolf, and Peter Pan author JM Barrie. And the bad guys in this story? Fossway, a Virgin Islands-based company that bought Undershaw in 2004 as a "development opportunity," then let the place go to hell to the point that there was rain running through the damaged roof like waterfalls. The neglect was so severe, the local council stepped in in 2006 and ordered mandatory maintenance to the tune of nearly £75,000. You can see the condition of the house, which Conan Doyle designed himself, in this video:

The derelict state of the 10,000-square-foot home is enough of an atrocity, but when the owners announced plans to chop it into three units, add a wing of five townhomes, and turn the stable block into garages, people really got upset. John Gibson, who has authored five books about Conan Doyle, started The Undershaw Preservation Trust and was quickly supported by bibliophiles such as Stephen Fry, Julian Barnes, Ian Rankin, and Mark Gatiss, co-creator of the BBC's Sherlock. There were flashmobs and Twitter hashtags and petitions, fundraisers and fan-fiction compilations and viral campaigns. By the time it was done, 1,360 official objections to Fossway's proposal had been filed.

But in the end, it was not Undershaw's rich literary history that saved it—after all its original design has already been compromised by an extension and it was used as a hotel from 1921 until 2004—but "legal flaws" regarding the council's decision to grant permission for the renovation.

So it's victory for now, but Undershaw's future is still uncertain. Neither the council nor Conan Doyle's distressed family can scrape together the money to buy the place outright, never mind the cash it would take to repair it. And campaigners have been unable to get it bumped up to the top tier of historical buildings because a government-sponsored report said the house is not architecturally unique enough to warrant protection and that "[Conan Doyle] cannot be said to be an author of the standing of, for example, Charles Dickens or Jane Austen." Ouch.

What would you like to see happen to Undershaw? Do you think maintaining the homes of our great writers is important? And do you agree or disagree with the report that says Conan Doyle is less important than writers such as Dickens or Austen?

Class Director
Rob from New York City is reading at a fast enough pace it would be cumbersome to update this May 30, 2012 - 11:20am

I would say if your country produces a new film, tv or stage adaption of his books every ten years or less, he's pretty culturally important.

@Rob Actually a really good idea, but they'd need to raise something in the order of 2.5 million pounds (I saw different figures in different places, but the lowest was still 2 million) to buy it and that wouldn't even start the restoration. That would have to be the biggest Kickstarter ever.