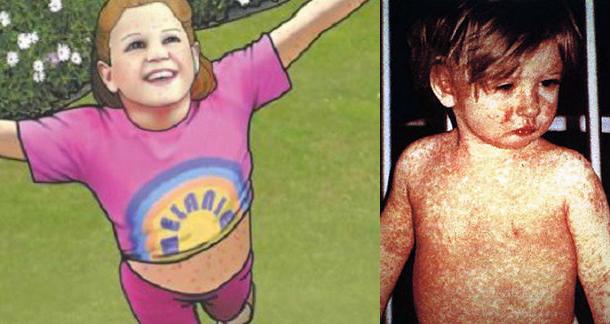 Today alone, more than 50 people have reviewed Melanie's Marvelous Measles by Stephanie Messenger, a self-published book about why you should not vaccinate your kids.

The overwhelming majority of them are not very nice.

Here's one of my favorites:

Of all the books advocating child abuse, this one probably has the best illustrations.

So, as reasonable people, we know vaccines are good. We know they don't cause autism. Because it's science fact! But if we've learned anything from stuff like global climate change, science fact means very little to some people. Like the dumb goons who don't vaccinate their kids based on fake science and "gut feelings"—resulting in the recent resurgence of measles, a disease once thought eradicated in the United States.

Melanie's Marvelous Measles is available as a paperback and an eBook, distributed by Trafford Publishing, a self-publishing service. Besides Amazon, it's also available on the Barnes & Noble website. The author lives in Australia, and it's her only published work.

This isn't a new book, either. It was published on Dec. 6, 2012. But given the recent anti-vaxx debate, the book is getting trolled hard with some very negative reviews.

My infant daughter went blind after contracting measles from an unvaccinated child, and yet there's no braille version of this wonderful book for me to give her someday to explain to her how awesome the disease that took her sight away is.

And here's a five-star review:

As a carpenter who specializes in itty bitty coffins I can't say enough good things about this book, my customer base has been growing at an epidemic rate!

Though, before you get too excited, here's a five-star review that's actually positive:

These comments are ridiculous. Vaccines have risk associated with them too. Go read the studies and pick up this book to help you get over the fear-mongering. Measles aren't suddenly making a comeback. There are statistics over the past decade to prove that.

Here's an interesting discussion point: This is not the first time that a controversial book has been self-published on a platform like Amazon. Like guides for sex tourism and pedophiles and rape fantasies about public figures. Now, clearly Amazon and Barnes & Noble don't support these things. But this is what happens when free speech and user-friendly publishing systems intersect. People are going to put up some dumb, offensive stuff.

In this case—are we a bit beyond the veil? Not vaccinating your kids isn't as simple as an argument about choice. If you don't do it, your kid could die, or someone else's kid could die. It's a very, very dangerous position to take, and one that's directly contrary to the public health.

So, in an instance like this, do sites like Amazon and Barnes & Noble have a responsibility to remove this book from the store? Or in the interest of preventing censorship, should it stay up?

Litreactor was my last safe haven from the vaccination/anti-vaccination debate. All is now lost.

Amazon and B&N are more than capable of maintaining in-house standards for self-published works. I don't think it would really even be termed "cencorship" for a corporation to impose standards on work with which it is associated. There are still plenty of self-publishing venues out there where someone who really wanted to publish something awful could go to see their whatever in print. To even bring up "the interest of preventing censorship" is almost irrelevant. They could easily say that they don't want to be involved with certain awful things; Amazon actually does have policies regarding "offensive content," but sometimes things fall through the cracks.

All that being said, as moronic and dangerous as not being vaccinated is, I'm not sure why they would specifically want to ban this book. It would be very difficult for them to make any policy that included wording regarding political/health issues like this.

Joshua Chaplinsky from New York is reading a lot more during the quarantine February 10, 2015 - 12:57pm

They should leave this up. Disclaimer: I'm on the same side of the debate as Rob all the way, and if I had kids I'd get them vaccinated, just the same way my parents did with me. But this book is probably not harmful because the people who will cheer for it had already made up their mind on the issue. They can give this author word of mouth advertising and it will reach like minded people, but they are really not a majority, if the reviews are anything to go by. Most people know this book is horseshit, and if the reviews continue to pour in it could soon go viral and be a laughing stock. Leave it up Amazon and let it have its moment of shame.

Carly Berg from USA is reading Story Prompts That Work by Carly Berg is now available at Amazon February 11, 2015 - 5:29pm

Interesting article. Did anyone else notice that even after being published for over two years, it's Amazon ranking is in the twelve thousands? That means the author made a good chunk of money from offending people with her 40 page book.