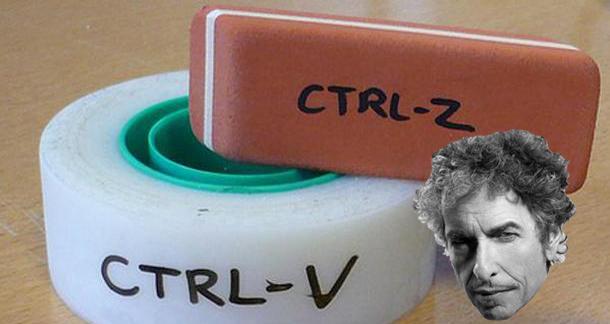 Last time we caught up with Jonah Lehrer, he was facing a shitstorm for recycling his own content. People were upset, but at least it kicked off a moral debate as to the legitimacy of his actions. This time around, everyone can agree he screwed up hard—for his best-selling book, Mr. Lehrer invented quotes that he attributed to Bob Dylan and passed off as real.

As you can imagine, once the falsification was revealed, everyone freaked out a bit: Lehrer resigned from The New Yorker under editor David Remnick’s advice, Houghton Mifflin Harcourt pulled every copy of Imagine: How Creativity Works it could find from bookstore shelves and eBook sites, and apology statements were issued.

Lehrer admitted that some Dylan quotes appearing in Imagine did "not exist." Others were "unintentional misquotations, or represented improper combinations of previously existing quotes."

“The lies are over now,” Lehrer said in a statement to the New York Times. “I understand the gravity of my position. I want to apologize to everyone I have let down, especially my editors and readers.”

If we can learn anything from this debacle, it's this: if you're gonna make shit up, always cover your tracks. (Or maybe the lesson is not to make shit up... I can't tell.)

Generally speaking, re-using your own content is hardly a sin. Many freelancers syndicate entire articles (such as this one from CSV you've used), and get paid twice (or thrice) for using not just the same one or two lines, but the same article. The only person who should or would have a problem with it is the editor signing your cheques. Anything else looks like mindless bitching about a guy getting the job you've always wanted.

Making shit up, though? That's a load of crap. As Einstein once said, "those damn make-believe bullshitters need to be strung up by their motherfuckin' entrails."

Jane Wiseman from living outside of Albuquerque/in Minneapolis is reading Look to Windward by Iain M. Banks August 1, 2012 - 4:26pm

Wasn't most of Hunter S. Thompson's work lifted from his articles in playboy and Rolling Stone?

It is not the equal as allowing for the performance in the conformist setting. The music has mislaid its understandable nature. The tone has been spoiled by the use of chlorinated water fairly than sea water. The happiness of the women's shouts punctuate the music sporadically.