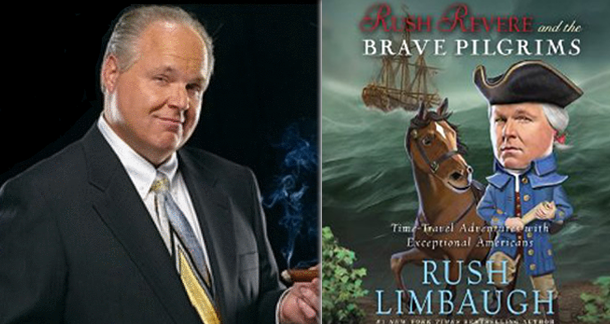 This seems to be a week for ‘what the frack?’ moments and here’s another one: opinionated talk radio host Rush Limbaugh has written a book for children. WHICH children? I hear you ask. Why yours of course. Entitled Rush Revere and the Brave Pilgrims: Time-Travel Adventures with Exceptional Americans, the book seems to have Limbaugh on the cover dressed as Paul Revere, which is odd enough, but it gets weirder when you read what he’s said about it:

Rush Revere is a substitute school teacher at a middle school anywhere in America, and he will take a couple of students with him to the first Thanksgiving, and they will learn all about it. Again it is a unique way of reaching the target audience here, which is America's young people — who are, sadly, not being taught what is in this book. And what's in this book is the historical record, accurate historical record of the Pilgrims. It's who they were, why they existed, where they were, how they got here, what they did when they got here, and what they did and why it mattered and related to the founding of this country.

No, I don’t know what Paul Revere has to do with the first Thanksgiving, either. Maybe he’s carrying on a theme…

Eagle-eyed readers might have noticed that Limbaugh appears to have turned himself into American revolutionary hero Paul Revere—an audacious move, certainly. Rush Revere also happens to be the main character in Limbaugh's iced tea line, "Two If By Tea."

The blurb for the audiobook version on Amazon holds forth that “Rush Limbaugh has long wanted to make American history come to life for the children of his listeners”. Right. I’m assuming he’s reading it for the audiobook, but it doesn’t say.

Now, I don’t have kids, but I can’t say I’d buy this for the wee bairns if I did, mostly on principle. But Limbaugh’s opinions and politics aside, is this sort of pop-history the best way to get kids interested in the subject matter?

Rush Revere and the Brave Pilgrims: Time-Travel Adventures with Exceptional Americans is published on October 29th.

So this seems to me to be Rush just admitting that most of what he says is fiction suitable for grade school kids. I'm reasonably certain he won't come close to nailing any of the facts.