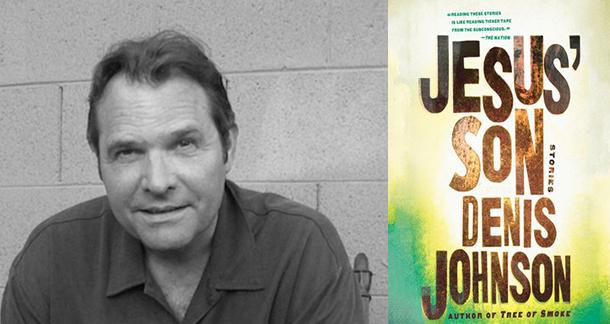 Denis Johnson passed away on Wednesday, May 24, reports the Washington Post, and maybe now he'll get all the respect he deserves.

That might seem like an odd statement, because plenty of readers know of Denis Johnson's work, but, in the literary arena, popularity can have a sullying effect. It's a sort of McDondald's Syndrome: if everyone likes it, how can it be good?

I first became aware of Denis Johnson through the film adaptation of Jesus' Son. The next day, I went out and bought the book. It was years before I realized the thing wasn't intended as a novel.

As a story collection, I honestly can't think of its superior.

When it originally debuted, a quarter of a century ago, Publishers Weekly called it "monotonous." They said "Johnson hopes the shock value of characters fatally overdosing in the presence of lovers and friends will substitute for creativity and hard work from him." They've been corrected by time.

There is not a single book that has been more suggested to me by writers.

Johnson's smooth, poetic voice, aimed at giving us the life of an incarnate fuckhead, allows us a picturesque rendering of an American addiction tale. Even the work of Jim Carroll doesn't get close to this. The work of Eileen Myles might tiptoe close but doesn't scream boo the same way.

I've taught the text multiple time, so I might be pulled by its magic into an odd orbit, in the wake of Johnson's passing, but it occurs to me that some authors have THEIR BOOK and all the other books they have just exist to show you how bad a motherfucker they are—how skilled.

If this is the case, Johnson's output allows for remarkable juxtapositions. Consider Jesus' Son against:

And then there was his poetry. Often times in form.

Those books are all fantastic. They all execute miraculously. Outside of Bartleby the Scrivener, I can't think of a better American novella than Train Dreams.

Still, Jesus' Son, with its hybridity, mixing elements of memoir, noir, weird, and Acid fantasy, is a work that most should, by default, understand is one of the best handfuls of texts to come out of the latter 20th century. It's author will be missed.

Sometimes what I wouldn't give to have us sitting in a bar again at 9:00 a.m. telling lies to one another, far from God.
― Denis Johnson

I had never read Denis Johnson until Chuck Palahniuk commanded me to. And after I did, I seriously questioned my legitimacy as a reader and as a writer. "How could I have missed Jesus' Son until now?" I asked myself. "And why don't I write like that?"

“Talk into here. Talk into my bullet hole. Tell me I’m fine.”

It's the best of prose and of poetry in just twelve words.

Johnson and everything he won't get to write are already missed.

Thank you for sahring this post. The book indeed was a good one. I thought the writer was able to capture the main essence and has written well. Looking forward to read more works by him.