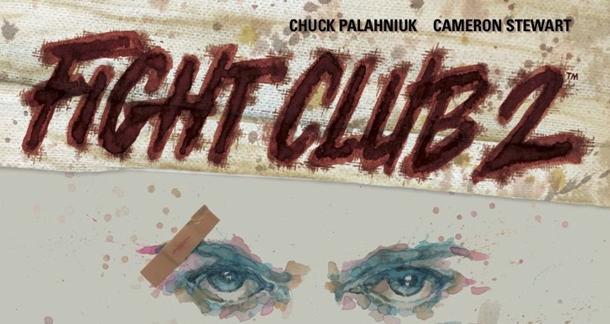 Playboy recently ran a six-page preview of Chuck Palahniuk’s Fight Club 2. In the comic we see the return of our unnamed narrator, who is ten years older, suffering from prescription pill dependence, and witness to a crumbling marriage. Marla, whose own dependence on support groups is made apparent, shares with him a troublesome son with a knack for making homemade gunpowder.

Some imaginary friends never go away … Ten years after starting Project Mayhem, he lives a mundane life. A kid, a wife, pills to keep his destiny at bay. But it won’t last long; the wife has seen to that. The time has come … Rize or Die.

Artist Cameron Stewart and Dark Horse Comics join forces with Palahniuk to bring you the follow-up to his bestselling novel. The sequel is due to hit shelves on May 27th. Palahniuk has previously mentioned that the second installment will be “dark and messy.” As for the plotline, he revealed the following tidbits, referring to the narrator as Jack: “Jack is oblivious. Marla is bored. Their marriage has run aground on the rocky coastline of middle-aged suburban boredom. It’s only when their little boy disappears, kidnapped by Tyler, that Jack is dragged back into the world of Mayhem.”

I can’t wait to find out what’s happened to our narrator—and to Tyler Durden—since Fight Club went to print! Is anyone else excited for Fight Club 2?

Yes, I am excited about Fight Club 2. Though I'm not a frequent reader of graphic novels, I think Mr. Palahniuk did the right, and courageous, thing by changing the format. I have the highest hopes this will be a good story.