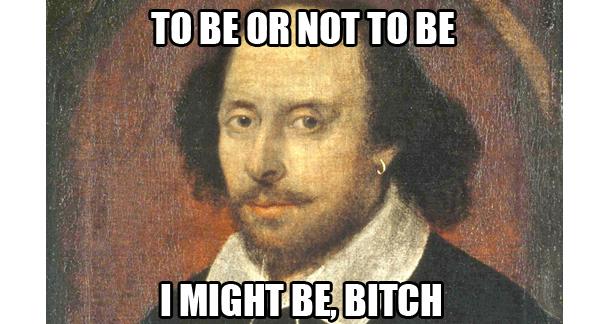 Who wants to read classic literature anyway? It's so old and musty and boring.

Well, I don't really feel that way. While I may not gravitate toward older works in general, I do appreciate them for their historical context. Lots of people, however, think the classics are a drag, and some of those people are high up in the publishing world. Take for instance the people at Random House, who are currently working on a massive project to modernize the works of William Shakespeare.

That's right—the one, the only Shakespeare. The Guardian's Allison Flood reports that Jeanette Winterson will soon produce a 'cover version' of the Bard's The Winter's Tale, which will be released alongside several other revamped works in 2016 to coincide with the 400th anniversary of the playwright's death. More from Flood:

The novels will be released under Random House's Hogarth imprint, with the series to be called the Hogarth Shakespeare. The publisher said the new versions 'will be true to the spirit of the original dramas and their popular appeal, while giving authors an exciting opportunity to reinvent these seminal works of English literature'. [sic]

Anne Tyler, the American Pulitzer-winner, will tackle The Taming of the Shrew, but no other titles or authors have been announced. According to Clara Farmer, publishing director at Hogarth, plans to produce more novelizations are in the works. "We hope to do the entire canon. We are already in conversation with several other authors and are really eager to hear from other people who are interested … We need people to step up for the tragedies."

Of course, reworking Shakespeare's tales for modern audiences is nothing new: The Taming of the Shrew was already updated as the 1998 film 10 Things I Hate About You; West Side Story is pretty much Romeo and Juliet with a few tweaks to the plot; and, as Flood notes, "Terry Pratchett played with A Midsummer Night's Dream for his Discworld novel Lords and Ladies," not to mention countless other works.

I don't see much of a problem with this kind of thing, though I think the updated texts should open the door to reading the classics, rather than replace them altogether. What does everyone else think?

I like Shakespeare, and when it is performed it is really easy to "translate" in your head and get what the characters are saying, on the flip side many people won't have opportunity to see the plays performed, and reading them can feel like another language.

I don't know. Modernizing them completely seems kind of silly in a way, as many of his stories have been done over and over without tacking his name to them (see: Every RomCom Ever, All The Chick Lit = Much Ado About Nothing).

Drat. They implemented the idea before I could. Heh. I've been planning on trying my hand at a Shakespeare modernization or two myself. Such things, as you say, certainly aren't new (Lion King = Hamlet), but releasing them under the original titles would be. Mind you, Shakespeare did a bit of that, too. Just so happened that his 'cover versions' were considerably better than the originals from which he, erm, borrowed the plots (and many character names).

Bowlder would be proud. He liked to change classic works. These people want to modernize it, so it is easier to understand. He wanted to remove all the naughty bits to make it tame for the kiddos. I think I'll stick to teaching the ones from the Bevington collections. Bevington's collections have some of the best footnotes.

Jane Wiseman from Danville Virginia--now living outside of Albuquerque/in Minneapolis is reading Kindred, by Octavia Butler June 29, 2013 - 6:48am

Ugh. One more way for my students to avoid some great writing just because it doesn't come from their immediate environment. Shakespeare will survive this, though. He certainly borrowed and rewrote most of his own material but did it brilliantly. What I'd rather see is actors and directors interpreting his works in innovative ways. That really does make The Bard smile up there in literary heaven, where he cringes over each production right out of Madam Tussaud's or some stuffy museum. I like Bevington too but have switched to the Norton/Oxford.

Jane Wiseman from Danville Virginia--now living outside of Albuquerque/in Minneapolis is reading Kindred, by Octavia Butler June 29, 2013 - 6:52am

GRRRR, double post, sorry.  Why does it DO that?