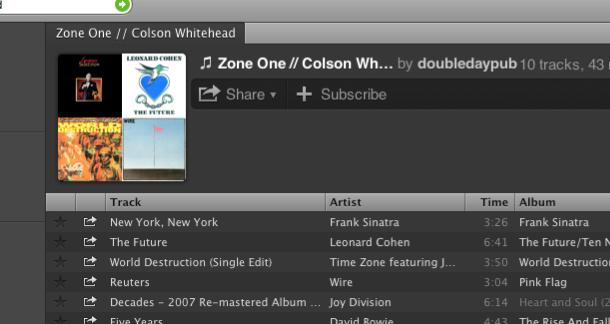 Book publishers Knopf and Doubleday have found a pretty cool use for Spotify, the Swedish-founded, UK-based, DRM-based music streaming service that I did not care about until right this moment. They're consulting with authors to build out custom playlists that represent their books.

Among the authors with their very own Spotify playlists are Erin Morgenstern (for The Night Circus), Jennifer Egan (for A Visit from the Good Squad), and Colson Whitehead, whose new novel, Zone One, comes out next week.

The synopsis for Zone One:

In this wry take on the post-apocalyptic horror novel, a pandemic has devastated the planet. The plague has sorted humanity into two types: the uninfected and the infected, the living and the living dead.

Now the plague is receding, and Americans are busy rebuild­ing civilization under orders from the provisional govern­ment based in Buffalo. Their top mission: the resettlement of Manhattan. Armed forces have successfully reclaimed the island south of Canal Street—aka Zone One—but pockets of plague-ridden squatters remain. While the army has eliminated the most dangerous of the infected, teams of civilian volunteers are tasked with clearing out a more innocuous variety—the “malfunctioning” stragglers, who exist in a catatonic state, transfixed by their former lives.

Mark Spitz is a member of one of the civilian teams work­ing in lower Manhattan. Alternating between flashbacks of Spitz’s desperate fight for survival during the worst of the outbreak and his present narrative, the novel unfolds over three surreal days, as it depicts the mundane mission of straggler removal, the rigors of Post-Apocalyptic Stress Disorder, and the impossible job of coming to grips with the fallen world.

The playlist for the book is interesting. It starts with New York, New York by Frank Sinatra and ends with Over the Rainbow by Judy Garland, with some David Bowie, Joy Division, and Leonard Cohen, among others, mixed in. This has, somehow, made me even more excited for the arrival of Zone One. (And yes, it's a zombie book, and that genre is pretty played out at this point, but Whitehead is the kind of writer suited to kick some new life into it.)

The playlists by Morgenstern and Egan are pretty rad, too. Egan included Iggy Pop, and that's more than enough to win me over. This is a great concept, and one that I hope more authors explore. Hearing the music a writer identifies as inspirational for a given novel adds an exciting new dimension to the work.

This is very interesting seeing as that I make playlists for WHILE i'm writing. Neat.

Joshua Chaplinsky from New York is reading a lot more during the quarantine October 11, 2011 - 7:45pm

This could single-handedly revive the career of Tangerine Dream.

Joshua Chaplinsky from New York is reading a lot more during the quarantine October 12, 2011 - 8:40am

Seriously, though, I have writing playlists on Spotify, but that's not the only activity I make them for. Check out my playlist, The Soundtrack To My Lovemaking. Enjoy!

I don't know enough about Spotify - does the author or publisher have to pay any licensing fees? Or is that covered by the subscriber?

While I was at Wiley, I made playlists for a couple of my books:

Of Note: It includes the Janáček sinfonietta so often cited in 1Q84.

Music from the Works of James Joyce

And more... just search the creator of these playlists.