Professor Banned From Using The Word ‘Hobbit’ In Title Of Lecture 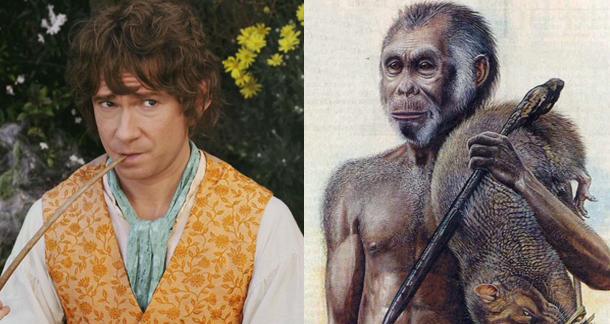 I honestly don’t know what Tolkien would have made of this.

Almost 40 years after Tolkien’s death, Dr Brent Alloway, associate professor at Victoria University in New Zealand, had planned a public lecture about a three foot tall species called Homo floresiensis.  Entitled “The Other Hobbit”, it was to coincide with the premiere of the new Hobbit movie on the 14th of December.

Being an upstanding citizen – at a guess – Alloway went to the people who hold the international rights to the Tolkien brand, one Middle Earth Enterprises. He was informed by their lawyers that:

It is not possible for our client to allow generic use of the trademark HOBBIT.

That settles that, then.

As Alloway pointed out in yesterday’s Guardian, the word ‘hobbit’ is in the Oxford English Dictionary, so one assumes it’s in general usage within the English language, and wouldn’t be trademarkable -- that's the normal take on this sort of issue.

The word 'hobbit' (in the Tolkien context) is frequently used with apparent impunity in the written press and reference to 'hobbit' in the fossil context is frequently referred to in the scientific literature (and is even mentioned in Wikipedia on Homo floresiensis). I realise I'm in unfamiliar word proprietry territory (as an earth scientist) … so I've gone for the easiest option and simply changed our event title.

The lecture is now called “A Newly Discovered Species of Little People – Unraveling the Legend Behind Homo Floresiensis”, which frankly isn’t quite as interesting, but I suppose it’s easier than getting sued by a multi-national.

I think it's pretty crappy. First, he took the time to ask--I don't think most would have. Second--he's just trying to drum up interest from his students. Is that really so bad? If he thinks they'll pay more attention if he uses the word "Hobbit", chances are those same students will be jazzed to go see the movie.

So the question I have: Are their lawyers correct in denying him use of 'Hobbit?' After all, I'm assuming his use was strictly academically and it is my understanding that there are exceptions for fair use or whatever, in that setting.

I say this as I put myself through college working at an AlphaGraphics next to a University. We produced course packets for some of the professors and my job was to obtain Copyright Clearance and pay royalties for any article, etc, that we copied and sold as a business. Whenver we copied articles for the professor to pass out in class, and not resell to students, to my knowledge we did not pay royalties. However, that was back in the '90's and here in the US, so I'm not certain what laws may have changed since then or what the differences are in an international setting.

This may be driven in part by the Tolkien estate's lawsuit against The Asylum. They're moving to block their next mockbuster, Age of the Hobbits, and part of Asylum's defense is that their movie isn't about the fantasy creatures -- rather, it's about a tribe of Homo florsiensis -- and that the "Hobbit" name is used frequently by the scientific community for this race. If the estate starts cracking down on academic use, they may hope that it will strengthen their case against entertainers who are starting to use the word, as well.

Of course, if the courts in The Asylum case rule against the Tolkien estate, the question is if the next edition of D&D will finally replace the word "Halfling" with "Hobbit."

Those lawyers were way off base. "Hobbit" is standard use. Even if it wasn't, copyright and trademark laws have limitations. Does the talk disguise itself as part of The Hobbit's brand? No. Does it defame The Hobbit in any way? No. Does it in any way cause damage to the estate? Again, no. There's no legal defensibility here.

Dunno about international usage, but as far as US law is concerned, the use of Hobbit in this lecture would fall under 'fair use'. I would have used it anyway.