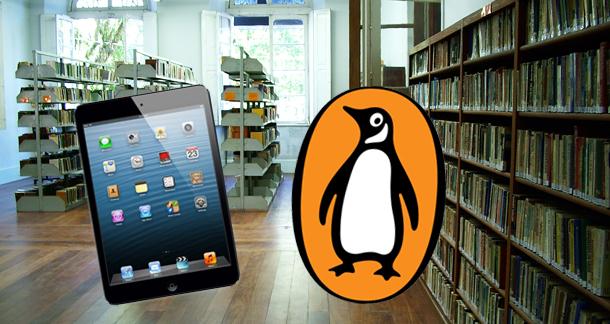 Starting this Tuesday, books published by Penguin Books (USA) will be available as lendable library eBooks on the same day the hardcovers are released, The Huffington Post reports. Previously, eBook titles were delayed six months for libraries over concerns immediate availability would hurt physical and digital sales.

Penguin has for months been tracking eBook usage at libraries through pilot programs around the country. The effect of library downloads on commercial revenues has been acceptable and the publisher was comfortable with making new releases available, the director of online sales and marketing, Tim McCall, said Wednesday. That means libraries can provide e-editions of Hosseini's And the Mountains Echoed starting with its official date of publication, May 21.

The American Library Association has been pushing for less restrictions on new eBook titles for some time now. Their president Maureen Sullivan was happy with the announcement:

I am pleased to learn that Penguin's pilot is confirming what research suggests and librarians believe: There is more to be gained than lost when publishers work with libraries. We are encouraged by Penguin's willingness to experiment, make adjustments and move forward with libraries and our millions of readers.

Italie notes, however, that Penguin and the other Big Five publishers do not currently offer unlimited library access to eBooks:

Libraries are allowed to lend out one e-edition at a time, for a duration determined by the library. Because eBooks don't wear out, libraries can purchase them for one year, then must pay again to continue making them available.

Is this a reasonable step in the right direction? It seems like it, considering Penguin's actions in the past. Do you think other publishers will soon follow Penguin's new model?