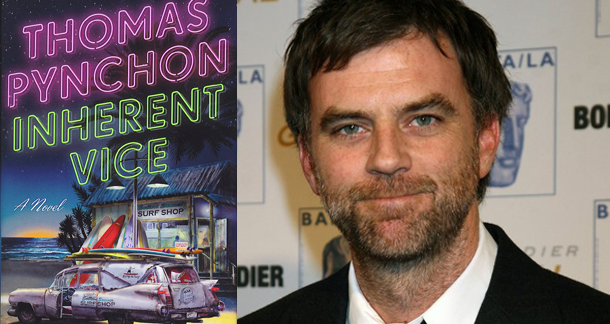 Director Paul Thomas Anderson, noted for movies like Magnolia and There Will be Blood, has announced his intention to direct an adaptation of Inherent Vice by Thomas Pynchon in the new year.

The story takes place in 1960s Los Angeles and tells of a drug-taking private eye named Doc Sportello. One day, his ex shows up and asks him to investigate a kidnapping plot against her new boyfriend. The more Sportello uncovers, the more tangled and strange the story becomes, bringing a rogues’ gallery of LA underworld types out of the woodwork. My particular favorite is the ex-con with a fondness for Ethel Merman.

News of Anderson’s intention to take on the project first surfaced in 2010, but he got distracted by The Master. Rumor has it he’s working with Pynchon on the adaptation, but according to a profile in the New York Times, he won’t mention the author’s name. Difficulties with the adaptation aside, he admits to “a large stack of pages” that are complete.

It’s more secretarial. The credit should be like ‘secretary to the author.’ [...] But it’s no less fun. In some ways it’s just what the doctor ordered right now for me: being more selfless.

Described as “the TV series Terriers as a period piece, with a bit more Big Lebowski thrown in, as well as Pynchon’s trademark verbal tics,” Anderson’s also admitted to using the Fabulous Furry Freak Brothers as a “research bible.”

There’s no news as to who will be the lead (rumors of Robert Downey Jr as recently as last year have not been repeated), but if he wants to shoot it next year, we can expect some more news soon.

Joshua Chaplinsky from New York is reading a lot more during the quarantine December 28, 2012 - 2:31pm

Super excited about this. Filmable Pynchon and one of the best directors working today.

This might turn out to be a masterpiece. I adore Inherent Vice (and not only because it´s one of few Pynchon books that doesn´t make me feel illiterate). I just hope they do not destroy it.