Ohio Couple’s Photo used on “A Gronking to Remember” Cover 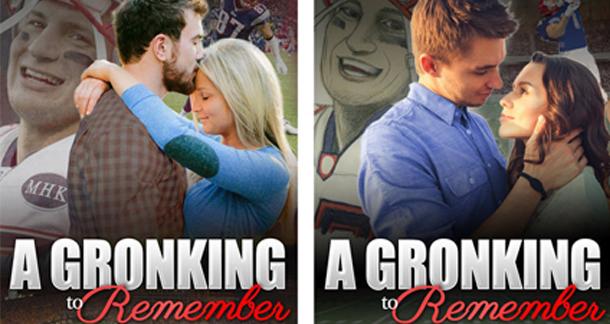 The novella, which has been previously described by Noonan as “obvious satire and parody,” was released last December for purchase on Amazon, Apple, and Barnes & Noble. Shortly thereafter Amazon yanked the eBook off its virtual shelves. The cited reason was the use of two photos of Gronkowski in his Patriots gear, faded into the background. The dispute was eventually resolved, and A Gronking to Remember went up for sale once again, with a noticeable change: the photos had been replaced by drawings of the football star, and all official logos had been removed.

Noonan’s troubles didn’t end there. Just last week another lawsuit was announced, this one touted by an Ohio couple claiming the picture of them embracing on the cover was used without permission. Again, Gronking was pulled from the shelves.

The eBook has since been updated with new cover art, and is back up for sale once more. Patriots fans should buy their copies now before it’s too late!

How would you feel if your picture graced the cover of Gronking?

I don't think parody and satire cover this from a legal standpoint. Gronkowski doesn't seem to have any problem with it, but she is using his likeness to sell books. I'm assuming that she hasn't paid him. How is this any different than the Scarlett Johansson case, other than that Johansson objected to it?

Either way, I have a serious problem with the use of copyrighted photos on covers. For one, we are artists and expect to be paid for our work. We should be the last people infringing on another artist's work. Secondly, it makes us all look bad and furthers the notion that indy authors are amateurs.

Joshua Chaplinsky from New York is reading a lot more during the quarantine May 4, 2015 - 10:46am

What is a Gronkowski?