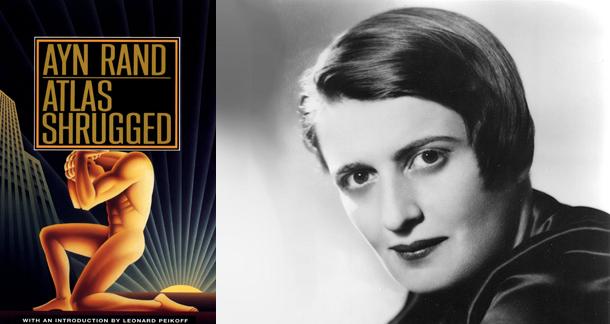 This is pretty funny. The producers of the Atlas Shrugged trilogy—wait, trilogy? Uh, okay—have launched a Kickstarter campaign to raise the $250,000 needed to finish the third and (yeah, I haven't seen the other two, but I'll say it—thank God) final film based on Ayn Rand's big ole book. Why is this funny? Because Ayn Rand was a staunch critic of altruism, the basic moral principle of giving to others without a desire for getting anything in return, and Atlas Shrugged is nothing more than one big manifesto for selfishness. It contains a 70 page rant from protagonist Jon Galt (seriously), in which this famous line is uttered:

I swear — by my life and my love of it — that I will never live for the sake of another man, nor ask another man to live for mine.

So, yeah, naturally, asking for donations from strangers to finish a film that promotes absolute selfishness and not asking for handouts makes total sense.

We can thank the The A.V. Club's Sean O'Neal for clueing us in to this juicy laugh-riot story. Being an A.V. Club writer, he naturally had a field day with it:

Of course—using the same foresight that’s convinced them it’s the third Atlas Shrugged movie that will finally reach the masses, despite the first two earning less than $8 million combined—both have already anticipated that certain people may find something ironic about their asking others to give, all to create a movie that’s little more than one long speech decrying the act of asking others to give. “Isn’t asking for charity antithetical to Ayn Rand’s philosophy?” reads the FAQ, to which the answer is an obvious no, because Rand’s philosophy just had a problem with being forced to give through some absolute moral authority, which Kickstarter definitely isn’t (yet).

So how do the producers justify this Kickstarter campaign? Simple: nobody's holding a gun to your head to contribute. Your donation "still qualifies as supporting rugged individualism, because you ruggedly, individually made the choice to do so, rather than out of some sense of subservience to a larger ideology."

Right. Moreover (and more galling), the Kickstarter FAQ assures us that the film is actually already funded, and the campaign is really just a marketing F-you to critics of the film.

We know from our experience with the first two films that there is an incredible amount of vitriol out there and, we have every intention of capitalizing on it this time around,” they write. “As we launch the Kickstarter campaign, those haters are going to come ALIVE. They're going to come after us in droves attacking us everywhere online. To them, we say thank you. Thank you for helping us spread the word.

Now, some of you may argue that utilizing Kickstarter is true to Rand's philosophies, since backers get prizes in return for their generous donations. Well, if you take a look at the prizes, you'll see that backers aren't getting terribly much. The $5,000 package, for instance, buys you a role as an extra in the film, but according to The Huffington Post, you have to arrange your own travel and accommodations (at your own expense).

What do you make of all this? I'm already tired of writing about it.

"Well, if you take a look at the prizes, you'll see that backers aren't getting terribly much."

It isn't the how much in return, it's the agreed appon value, if a backer doesn't think he/she is getting a good enough return or trade for their backing a project, then by all means don't back it. But if they think it's of fair value, then do so.


"The symbol of all relationships among such men, the moral symbol of respect for human beings, is the trader. We, who live by values, not by loot, are traders, both in matter and in spirit. A trader is a man who earns what he gets and does not give or take the undeserved."
-Ayn Rand, Atlas Shrugged, Part 3, Ch. 7

Irony, exacly where? Objectivism asserts that, first, it is only morally wrong to make people give handouts when it is done against their will. Lastly it is wrong to recieve handouts from people who where coerced to do so. I have to digress after all because a Kickstarter campaign is very diffrent from a social convention and as an adult you should know that.

If I make money in the free market (which I do) and choose to give money to the production of what will most likely be a crappy film (which I do not) then I think Rand would say I can do as I please with said money, whether I'm hoping for a direct financial return, or hoping to see a certain film get made.

I'm not defending her writing, but I really think the bashing Rand's work takes in the literary world is 90% politically motivated.

I think this: that Atlas Shrugged is more read and influential than all of the stuff you will ever write, combined.