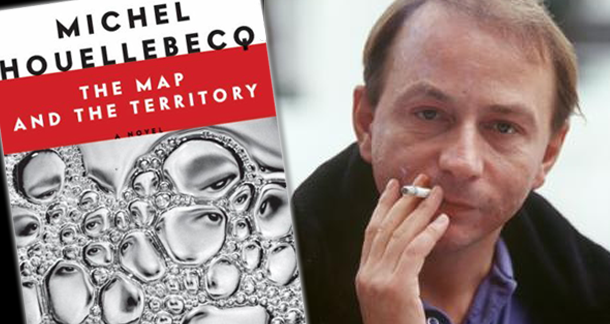 Michel Houellebecq, a French novelist known for being offensive and rebellious, not to mention being “hailed as France’s greatest living novelist”, is also what one might describe as eccentric. I don’t think anyone was surprised in 2011 when he disappeared for a week — during a tour of the Netherlands and Belgium promoting his latest novel, putting it down to that eccentricity no doubt.

But no one could have predicted the social media frenzy that ensued, with lots of speculation about his “mysterious disappearance” or even “kidnapping.” There were even demands that, according to The Guardian's Angelique Chrisafis, “the French press investigate whether he had been taken hostage by al-Qaida.”

After days of speculation, the notoriously hard to contact author, who is no fan of mobile phones or email, eventually surfaced to continue promoting his latest novel, The Map and the Territory. But the reasons for his temporary disappearance were never explained.

Now, even more bizarrely, a film called L' Enlèvement de Michel Houellebecq, or The Kidnapping of Michel Houellbecq, has just been finished by a French production company — with Houellebecq cast as himself. Chrisafis writes:

The director, Guillaume Nicloux, who has previously cast Houllebecq in a cameo role in another film, vowed to "retrace the week he disappeared" – describing it as "truth, lies, suppositions" and promising that "truth goes well beyond fiction". The film company, Les Films du Worso, has remained tight-lipped on the script and storyline and whether the author had a hand in it. If so, his disappearance could be put down to anything from running off with a cloning cult to sitting at home alone eating ready meals in a grim French suburb.

Is anyone really interested where he was for that week? Do you? I don’t know. Eccentricity’s one thing, but I’m not sure I care enough about that missing week (beyond it being an oddity of one human’s behaviour) to go see this film. Maybe if it turns up on Netflix…

I've yet to hit any Michel Houellebecq though he's high on my list, mostly because I can't help but pronounce his name as "Holla Back Yo" in my head.

There are a lot worse plots than this as far as artsy fartsy flicks go, I wouldn't go out of my way to see this but who knows.

As far as authorial missing persons go I do find the disappearance of James Havoc a fun bit of lore and often wonder weird path he went down to erase him from the world, or if any part of the legend is true at all.

I'd rather see JCVD.