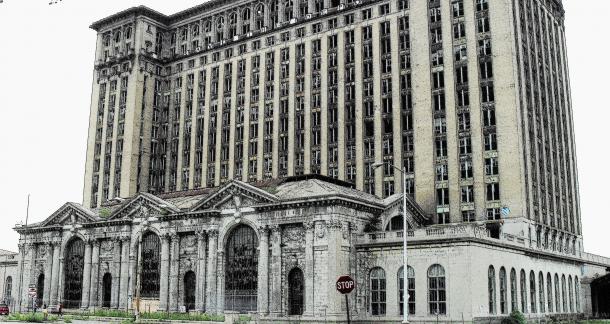 There's...5,000 bus stops in the City of Detroit. About half of them don't have any place to sit, and 1 out of 8 Detroiters ride the bus every day. We want to be those people that give them a break.

SitOnItDetroit has delivered in giving residents a break, and they went just a little further and gave them books as well.

The two-man company won a small ($1,100) grant and used the cash to build wooden bus benches with bookshelves in the sides. The design is simple. A two-sided bench, the sides fitted with shelves, and a hinged Plexiglas window protects the books from the elements.

The grant came courtesy of Detroit SOUP, an interesting fundraising group that works like this:

Detroit SOUP is a microgranting dinner celebrating and supporting creative projects in Detroit. For a donation of $5 attendees receive soup, salad, bread and a vote and hear from four presentations ranging from art, urban agriculture, social justice, social entrepreneurs, education, technology and more. Each presenter has four minutes to share their idea and answer four questions from the audience. At the event, attendees eat, talk, share resources, enjoy art and vote on the project they think benefits the city the most. At the end of the night, we count the ballots and the winner goes home with all of the money raised to carry out their project. Winners come back to a future SOUP dinner to report their project’s progress.

Much like the Little Free Library system, people are free to take books from benches without any checkout procedures or other nonsense. The books seem to be circulating, and one college student even managed to save $150 by finding a needed textbook that some other kindly student left in one of the bench libraries.

It's a pretty awesome system for book-lovers. Almost awesome enough to convince me to apologize for calling Detroit a "hellscape." But that apology will stay buried deep inside until I see the dream of a Robocop statue become a reality.