New Trailer for ‘The Hobbit: The Desolation of Smaug’ 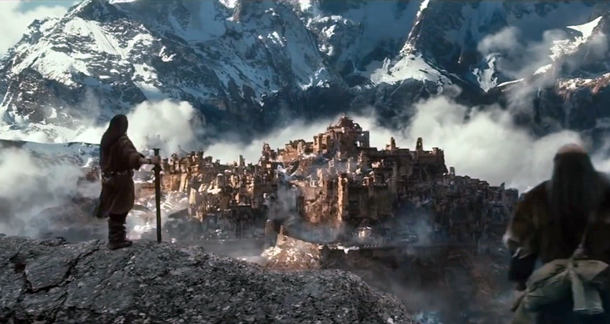 Peter Jackson’s saga of The Hobbit proceeds apace and, like Ben Child in the Guardian, I can’t believe he’s going to be able to fit everything in, mainly because “JRR Tolkien just left too much stuff out!”

One can just imagine the esteemed Oxford professor's horror after completing work on the 1937 book's final page, only to discover that he forgot to include Legolas, the silken-tressed elf princeling played by Orlando Bloom in Lord of the Rings. Imagine his pain when he realised he had also inexplicably failed to make room for a gorgeous lady elf romantic interest played by Kate from Lost. Consider his torment when it suddenly hit him that Bard the Bowman could really do with more than one line of dialogue. All these oversights and more are clearly going to be rectified in The Desolation of Smaug, if the second full trailer for Jackson's film is anything to go by.

He goes on to point out that Jackson’s left some of it well enough alone, like the dialogue between Smaug and Bilbo. “Tolkien gave the film-makers plenty to work with here, and Martin Freeman, Benedict Cumberbatch (as the voice of the dragon) and an army of Weta Digital special effects experts have clearly been given license to fill their boots.”

Yes, looks beautiful and hardly anyone (beyond the purists) is going to complain about the additions. I’m looking forward to it — how about you? Have a look at the trailer and you’ll see what I mean…


The Hobbit: The Desolation of Smaug opens in the US and UK on December 13.

OH! It's marvelous and lovely! I admire Peter Jackson's work both in the LOTR and the Hobbit! Even step asides from the books don't spoil it, they are quite authentic, in my opinion.
More about the trailer itself: VOICE! THE VOICE! (you know what I mean - Benedict "The Fire Breathing Dragon" Cumberbatch!)

Dino Parenti from Los Angeles is reading Everything He Gets His Hands On October 2, 2013 - 10:41am

Great move to get Cumberbatch to voice Smaug. The next-generation Alan Rickman.

Jeff from Florida is reading Another Side of Bob Dylan by Victor Maymudes October 6, 2013 - 5:55am