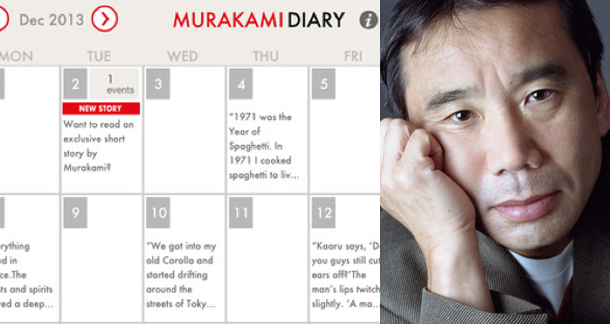 It’s not uncommon to replace apps pre-installed on the iPhone or iPad with alternate versions these days (just witness the Apple Maps debacle, for instance; I replaced mine with Google Maps ages ago). Now you can replace the Calendar app with an app styled around Japanese author Haruki Murakami’s fiction.

Timed to coincide with the launch of 1Q84 in paperback, the app doesn’t reproduce Murakami’s work, but scatters quotes from his short stories and novels through the days. There are also six exclusive short stories available via the app as well as newly designed covers for his backlist.

It looks good, by most reports functions well, and an added feature means it integrates with the iBook app, allowing users to buy eBooks which then download in the background. Fans may be a bit disappointed it doesn’t do more (although the short stories may be enough to make it worth it).

The geek in me (both literary and technological) would love to see what Random House might do with a fully-fledged interactive version of one of Murakami's novels, more around contextual notes and perhaps the musical references than anything flippant like flinging cartoon cats around the screen.

But at least it does fulfill a useful function as it’s not just an app you download once and then forget about. The £1.99 price may restrict it to true fans — and it’s not available in North America, probably due to rights issues.

Publishers are working hard to come up with new promotional tools to market authors' works and, by this standard, they’re not doing too bad a job. But how many author-themed apps can anyone use at one time?