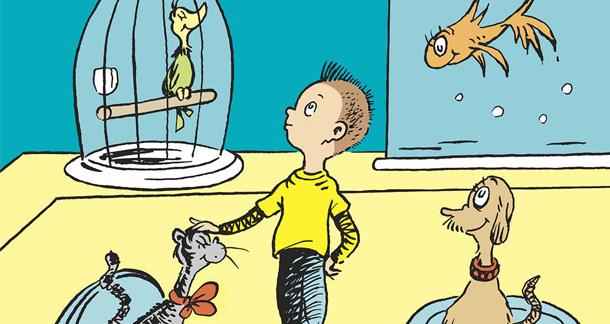 Some of you may remember the hubbub surrounding an unearthed Dr. Seuss manuscript, found months ago. Originally discovered by the late Seuss’s wife and his secretary, the book will now be published, hitting shelves July 28, reports KTLA.

What Pet Should I Get? has drawn the interest of many Seuss fans, causing the number of preorders to rise steadily since the announcement of its future publication and spurring rhyming reviews honoring the late author from outlets such as The New York Times.

Though the initial print run consisted of 500,000 copies, that number was increased to 1 million copies in order to meet public demand. It will be the first new book from Seuss in 25 years.

What Pet Should I Get? stars the same siblings featured in One Fish Two Fish Red Fish Blue Fish. The Amazon synopsis outlines the fun and quirky plot:

This never-ever-before-seen picture book by Dr. Seuss about making up one’s mind is the literary equivalent of buried treasure! What happens when a brother and sister visit a pet store to pick a pet? Naturally, they can’t choose just one! The tale captures a classic childhood moment—choosing a pet—and uses it to illuminate a life lesson: that it is hard to make up your mind, but sometimes you just have to do it!

Have you preordered your copy of What Pet Should I Get? yet?