Neil Gaiman To Appear On "The Simpsons" Sunday, November 20th 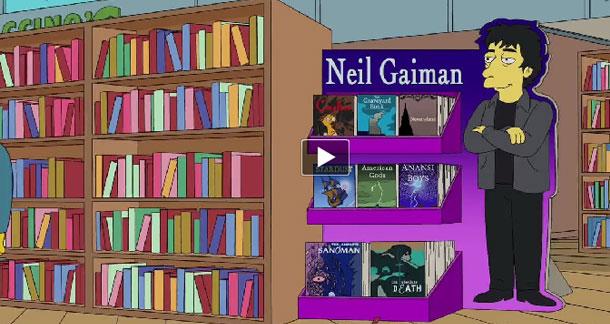 Attention all Gaiman fans and Simpsons fans: prepare to have your respective chocolate bars and peanut butters forceably mixed.  Neverwhere Neil was on Craig Ferguson last week and, amongst other things, previewed a clip from his upcoming appearance on The Simpsons (which you can watch on Facebook). The episode is called "The Book of Job," and sees Gaiman playing a jaundiced version of himself who joins the Simpson family's fantasy book writing team. I could be mistaken, but I believe he also plays foil to a bowl of egg salad. Hilarity, I'm sure, will inevitably ensue.

Gaiman recorded his part back in January, and has written about the experience on his Journal. On his interaction with director Matt Selman, he wrote:

Matt was my director, and was terrific and reassuring. Him: "Can you do an American accent that would sound to Americans like Dick Van Dyke's English accent sounded to you?" Me: "Er..."

The episode airs Sunday, November 20th. Check your local listings and all that. After you watch the clip, you can check out Neil's appearance on Craig Ferguson below.

Gaiman can do no wrong.