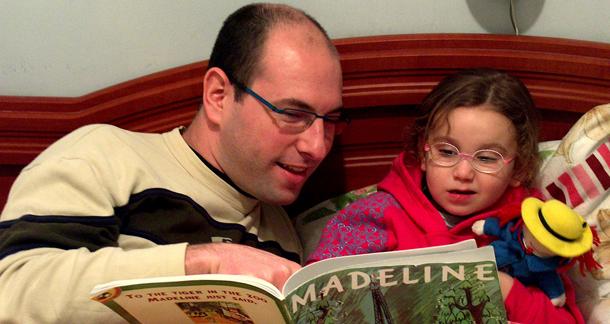 Reading bedtime stories is a good way for parents to bond with their kids. But according to this Guardian article, many in the UK are no longer engaging in the practice at all, or they are not doing it regularly. More from the article's author, Liz Bury:

A poll of 2,000 mothers with children aged 0-7 years, carried out by the clothing and homeware retailer Littlewoods, highlighted the extent of the change. Only 64% of respondents said they read their children bedtime stories, even though 91% were themselves read bedtime stories when young.

The survey also found that in previous generations, parents who read bedtime stories did so more regularly than their modern counterparts. Only 13% of respondents read a story to their children every night, but 75% recall being read to every night when they were kids. On average, today's parents read bedtime stories to their children three times a week.

Stress and lack of time showed up as reasons for not reading, as well as a perceived lack of interest in books on the part of their kids.

Before we all start clutching pearls and promising to burn the UK for their anti-bedtime story stance, let's remember that this data should be taken with a grain of salt. This was a survey carried out by a retail store, after all, and therefore not a scientific study. Furthermore, as of 2012 there were approximately 63,705,000 people living in the United Kingdom, so 2000 moms hardly represents a huge swath of the population. And for that matter, who's to say the dads in those households don't do the reading?

What about those kids with two dads—are you going to ask them, Littlewoods? Are the women polled single mothers? If so, it's understandable they would feel too stressed to read to their kids at bedtime. It doesn't make them bad parents. Also, what's the socio-economic standing of these women, married or no? How many hours a week to the have to—not elect to—work each week?

Too many open questions here for me to consider this survey even remotely valid. I'm not in denial—I know reading in general is on the decline, and that is sad—but show me something that actually proves it.

But that's just me. What do you think about the numbers presented in this survey?

I spend time in the UK and have a large number of family members there. Now obviously, I interact with my own circle there and don't live there so I'm not fully immersed in the culture-- but I haven't seen anything that would lead me to believe that more than half of all children aren't being read to. You can sleep easy, Christopher.

Joshua Chaplinsky from New York is reading a lot more during the quarantine September 13, 2013 - 10:15am

I heard UK parents don't even HUG their children.

While I agree with everything you said about the study being incomplete, biased, and non-representative, for 4% of moms surveyed to say their kids don't even own a book is startling. I can't imagine me, as a child or now as an adult, or my children not owning a single book. Even though this number is not representative, 80 moms admitted to their children not owning a book. That is sad.