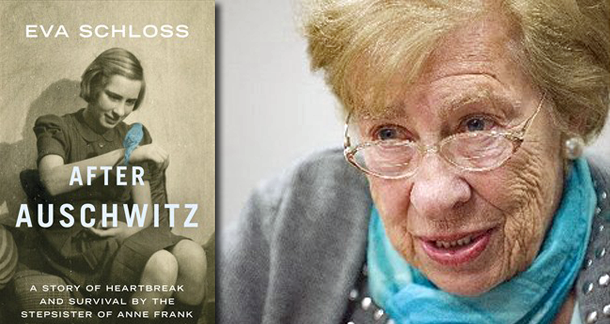 A former playmate of Anne Frank is releasing a third book about life as a survivor of the Holocaust. With the imminent publication of After Auschwitz: A Story of Heartbreak and Survival by the Stepsister of Anne Frank, Eva Schloss, who has published two books about her experiences at the hands of the Nazis, moves into territory no one talks about: what happened to the people who survived the concentration camps and went on to have lives once again.

With her third book, Schloss said she wanted to focus on the lifetime of suffering faced by survivors after the slaughter of six million Jews by the German Nazis and their collaborators... "After the war Europe was in chaos and no one wanted to know what had happened to you. People felt guilty. You had to stay quiet and suppress your fears which came out in nightmares. You just had to try to live with it."

Neighbours and friends of the Franks, Schloss's mother married Otto, Anne Frank's father, after the war and Schloss said his "relentless optimism" helped her survive the post-war years. Now 83, it is even more important to Schloss that ageing survivors of the Holocaust tell their stories "while they still can" to help younger generations comprehend what happened and the suffering Jewish people faced.

"All us survivors are quite elderly and in a few years we won't be around so we need to tell our stories," she said. "Racial tolerance is improving with more mixed marriages but religious tolerance seems to be getting worse with more fanatics now. It is my duty to try to explain and to promote more acceptance and tolerance in the new generations."

And that's the key: making sure future generations understand what happened and not forgetting that it could happen again. Is it getting better? Sometimes I think so, and then something new happens and I change my mind.

After Auschwitz is out this week.