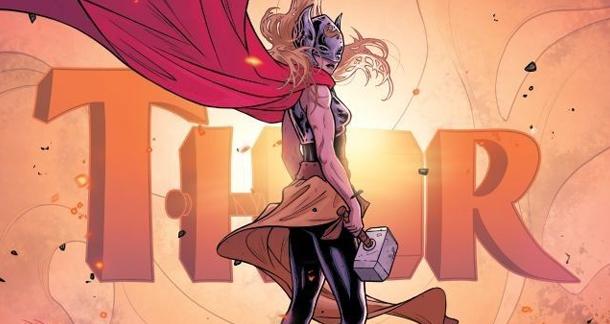 You may remember the hubbub first arising last summer after the announcement that Thor’s newest reincarnation would be a woman. Following the uproar from critics who panned the idea of a female playing the part of the Norse God, writer Jason Aaron has finally struck back in the latest issue of the Marvel comic.

The Guardian perfectly quotes the moment when female Thor faces off with her foe, the Absorbing Man. “Thor? Are you kidding me?” the villain complains. “I’m supposed to call you Thor? Damn feminists are ruining everything. You wanna be a chick superhero? Fine. Who the hell cares? But get your own identity. Thor’s a dude. One of the last manly dudes still left. What’d you do, send him to sensitivity training so he’d stop calling Earth girls ‘wenches?’”

The goddess, in a very symbolic moment that embodies just how she feels about critics, breaks his jaw. “That’s for saying ‘feminist’ like it’s a four-letter word, creep,” she replies.

“It’s a pretty great moment, one that’s cartoonishly on the nose when taken out of context, but hilarious when you’re aware of the criticism the Thor creative team has been getting over the story,” Josh Rivera of Entertainment Weekly wrote in a recent article.

This just goes to show the world that writers always have the last word! What are your thoughts, readers? Does this bring back any fond memories of other works in which authors had the chance to fight back against excessive criticism?