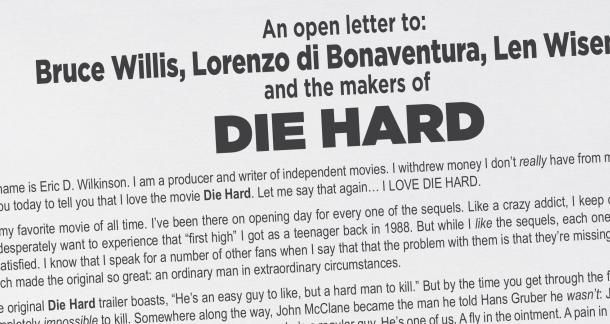 Former hero cop John McClane, 60 years old and beat to shit, is a convicted felon being carted off to Federal prison. Why?

Thus begins Eric D. Wilkinson's pitch for the next Die Hard movie. A pitch which has received attention mostly for the unusual way it was made.

Wilkinson decided the best way to get his idea noticed was to take out a full-page ad in The Hollywood Reporter, which cost a few thousand bucks, but has gotten him at least some attention.

And if I'm being honest, his pitch doesn't sound half bad.

The idea for Wilkinson's Die Hard is partially a reaction to the next planned installment in the Die Hard series, Die Hard: Year One, which would tell John McClane's origin.

When I read the announcement and it said the movie was going to have an origin story, I wasn’t thrilled about that...The original Die Hard is the origin story. Before that, he was a police officer in a bad marriage.

In Wilkinson's pitch, the next Die Hard story takes place in the present when McClane is caught up in a prison riot. What landed McClane behind bars is a murder that ties back all the way to his early days as a cop. In a way, that origin is still in there, or a connection to the past.

You can read the full pitch here.

Class Director
Rob from New York City is reading at a fast enough pace it would be cumbersome to update this November 12, 2015 - 10:17am

THIS IS NOT A BAD PITCH!!

Dwayne from Cincinnati, Ohio (suburbs) is reading books that rotate to often to keep this updated November 12, 2015 - 4:32pm

I've paid to see worse movies than this and been happy to do it.