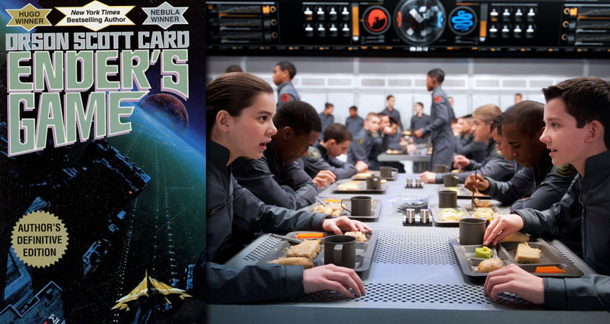 I bet DC Comics and the makers of Ender’s Game are wishing they’d had a better start to 2013. Or that Orson Scott Card would just shut up about gays. Ah, but it’s too late, you say? Once it’s released onto the interwebs it’s there forever? Well, you may be right.

The latest news in the saga of Card’s issues with gay marriage (he doesn’t like it, obviously) concerns his upcoming movie, the aforementioned Ender’s Game, based on his 1985 novel of the same name and it’s not good: major media companies are threatening to stop promoting the movie. Summit Entertainment, who made the movie, moved the release date from March to November to “take advantage of the holiday box office”, but it could also allow some of the current controversy to die down.

They’ve now got issues as to how they handle Card’s involvement in the promotion, like an appearance at July’s Comic-Con — it would be a big problem if he’s asked about his views in any Q&A session. According to the Hollywood Reporter there seems to be some consensus on the issue in the industry.

I don't think you take him to any fanboy event,” says one studio executive. “This will definitely take away from their creative and their property.”  Another executive sums up the general consensus: “Keep him out of the limelight as much as possible.”

People close to the movie are already distancing themselves from Card, but it’s not going to be an easy task, particularly as he’s one of the movie’s producers. I don’t envy them the challenge, either. What do you think? Can they build up the movie and leave Card in the shadows? Is the story going to continue to run? I’d say it probably is.

I don't think it will make much of a difference. There are a lot of people who will go to see the movie who won't know anything about Card. You can definitely promote a movie without promoting the author of the book it was based on. I don't think it will really even be all that hard to do. The studio will make money hand over fist, probably a sequel or an Ender's Shadow spin-off, and Card will keep going on about homosexuality.

I loved Ender's Game and i'll see the movie. I don't let politics or beliefs get in the way of my entertainment.

I personally do not have to agree with an artist's stance on issues to enjoy the work they produce. I believe in freedom of speech and freedom of expression for everyone, even for people with whom I disagree.

Dwayne from Cincinnati, Ohio (suburbs) is reading books that rotate to often to keep this updated February 22, 2013 - 11:33am

Jack is right, provided they keep him out of the lime light.

Card is a sci-fi author, a mormon and a homophobe. I'm a sci-fi fan, I'm also an outspoken athiest and I'm openly gay, as anyone who read my Teleport Us submission might have figured. Guess what, I want to see this movie, the same way I want to read Ender's Game but just haven't gotten round to it. On that note, wouldn't it be more of a personal backlash against Card if he found out people like me were actually buying his book instead of boycotting it, and thus putting money in his pocket? What would he do, send me back the royalty he got from when I bought Ender's Game? I seriously doubt it!

The way that people boycot homophobic celebrities, it's as if they think those of us who prefer our own gender haven't grown a skin about it. Not everyone it going to like it, I just deal with it, I'm thankful my family are fine with it and my friends are as well...what does it matter if an author I'll probably never meet disagrees with my lifestyle? If he did it to my face I might have something to say about it but I like to think it would only be 'Thanks for your opinion but I'm changing nothing.' Half the authors I read I'd probably find something to disagree with about if I ever had a discussion with them, I often think even a very liberal person harbours a secret dislike or diapproval of something.

I've been hearing about Orson Scott Card a lot lately. His name has been on my radar for years, but I've never read anything he's written. I also didn't know anything about his views. Is it important to know the views of an artist before we consume their products? I think we'd miss out on a lot of interesting works if we avoided everyone who had a different view.

I do not support his views/beliefs, but he is entitled to his opinion. Or as Drummond says in Inherit the Wind, everyone has "the right to be wrong!" Having said that, I don't think I will be reading any of his stuff. I'm not a huge fan of scifi.

Dwayne from Cincinnati, Ohio (suburbs) is reading books that rotate to often to keep this updated February 23, 2013 - 5:11am

Ender's Game is brilliant without that he'd be a never was, the sequels are sort of neat. He just seems determined to be the guy who makes others opposed to homosexuality say, "I don't know if I'd take it that far."

I'm not sure I'd be able to buy/read/watch anything if I had to keep a list of people who didn't believe like I do.