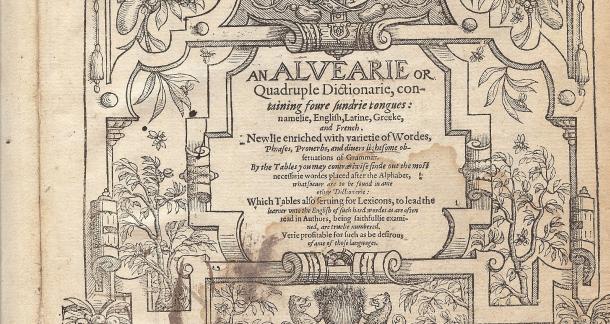 The book in question, John Baret's An Alvearie or Quadruple Dictionarie, published in 1580, was purchased by booksellers Daniel Wechsler and George Koppelman on eBay six years ago. The pair paid just over $4000 for the book that, if verified as Shakespeare's, would prove nearly priceless.

In the six years since the purchase was made, Wechsler and Koppelman researched the book in an attempt to build a case that the book did, in fact, come from the Bard's bookshelf. It is unsigned, however, several pieces of evidence would lead one to believe that it very well may have been a source of inspiration for Shakespeare. Thousands of handwritten annotations throughout point to some of Shakespeare's well-known works, including Hamlet, and there are eight spots throughout where the book's owner practiced writing the letters "W" and "S". The bookselling pair made attempts to bring in the academic community, and though many scholars were helpful, few were willing to risk their reputations on a concrete statement regarding the book's authenticity.

The Folger Shakespeare Library in Washington D.C. will release an official statement. In the meantime, Wechsler and Koppelman have compiled their research into a book that explains their case, Shakespeare's Beehive. Curious readers can also view a great deal of the information here.