Life of Pi Gets A Trailer 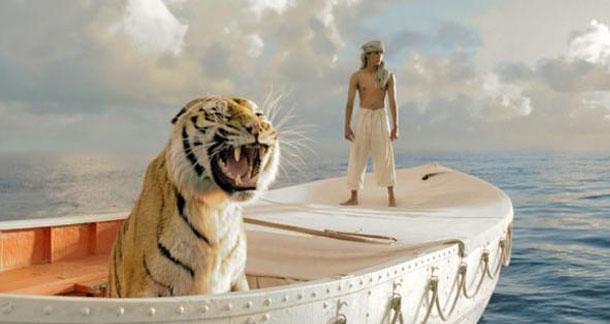 Ang Lee's adaptation of Yann Martel's Life of Pi has a trailer. It is a very, very pretty trailer. Look at all the colors! That zebra came out of nowhere! Bioluminescence! I will always and forever give Ang Lee the benefit of the doubt. So I will go see this movie, probably.

Perty, but they should have cast Kal Penn.

"The Lovely Bones" was pretty, too, but ultimately not all that satisfying. I guess I'll wait and see.

I'll go see it because I loved the Life of Pi but I'm not convinced it will work that well in a film.

WesFord from America (CO, NE, NC, AK, NY, WA) is reading We Have Always Lived in the Castle by Shirley Jackson, Portable Atheist by Hitchens, 20th Century Ghosts by Joe Hill July 26, 2012 - 11:12am

^Interesting. Mike happens to join yesterday and coincidentally has a site about movies that he's linked in the two posts he's made.

WesFord from America (CO, NE, NC, AK, NY, WA) is reading We Have Always Lived in the Castle by Shirley Jackson, Portable Atheist by Hitchens, 20th Century Ghosts by Joe Hill July 26, 2012 - 11:17am

I'm sure I'll see this movie. Ang Lee rarely disappoints. I've not bent to popularity and read the book so I'll have an unbiased mind (except for the Ang Lee respect) going in. If I go out and buy the book after seeing it, then it's a win.

If nothing else I will justify my going with the glowing whale jumping out of the water. That was pretty sweet looking; however, not as sexy as the bioluminescence in The Beach, but what is?