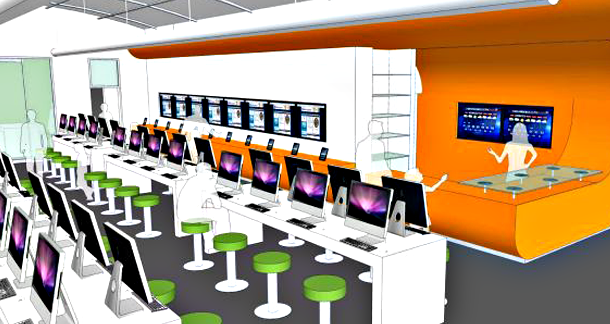 Walking into the new BiblioTech public library in San Antonio, Texas, you might be more than a little startled by what you see. But what's most startling about the library isn't what you will see, but what you won't: paper books.

We reported about the proposed radical concept last January, but now BiblioTech is open to anyone in Texas' Bexnar County with a library card. At BiblioTech, patrons can browse for books on huge iMac screens, check out laptops, or borrow one of the library's hundreds of eReaders or tablets to read the library's more than 10,000 available titles. The library very much resembles an Apple store, with its clean, colorful decor, bevy of glittering tech gadgets and cheery, uniformed tech ambassadors.

Now, before paper book lovers raise their pitchforks and torches to once again bemoan the growing encroachment of eBooks and eReaders (seriously, where do you guys even keep getting those things?), it should be noted that BiblioTech isn't located in some tony suburb or hipster enclave, it's located in a nondescript strip mall on San Antonio's greatly impoverished south side. As a result, the library is allowing people with very little access to—not only technology—but quality literature, to read and learn to their hearts' content.

With more and more traditional libraries facing ever-expanding costs and ever-shrinking funds to run them, many are being forced to shutter their doors, shutting out the people who may need their services the most. Lean, small, low cost libraries like BiblioTech could be the future of libraries, especially in poor or remote areas of the country.

How Libraries Acquire Books (Because Most People, Including Digital Piracy Advocates, Don't Seem To Understand This)