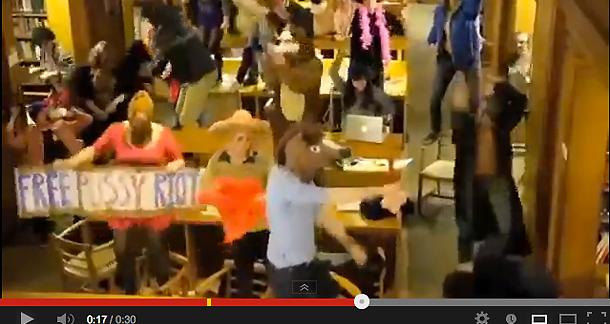 I'll just lay my "old fogey" card on the table and say it: I don't get the Harlem Shake. Despite the insistence that the videos are funny, the humor is lost on me. But at the same time, every rehash and parody out there have been made in the spirit of fun and camaraderie, so I can't knock the phenomenon too much. That's why it's a bit baffling that Calyspo Nash, a librarian at Oxford University, was fired over a video filmed by students in the library, particularly when Nash had nothing to do with the "incident." Apparently, the fault lies with Nash because she failed to prevent it.

According to The Huffington Post, various colleges at Oxford filmed their own Harlem Shakes throughout the month of February. The students in the library, however, did not obtain permission beforehand. Nash merely happened to be on duty when filming took place. She knew nothing of the students' plans and in no way sanctioned their behavior.

In addition to Nash's firing, the Harlem Shakers were fined  £30 to £60 pounds for their involvement. George Galloway, a member of parliament, has petitioned the House of Commons, insisting Nash be reinstated. According to The Huffington Post UK, Galloway said the College authorities "seem to have suffered a severe sense of humour loss." Oxford University has yet to comment on the issue.

Love them or hate them, it seems a bit harsh to fire someone over a silly little Harlem Shake video. What does everyone else think?

11 Reasons You Should Not Get A Degree In Library Science

This is ridiculous. On the other hand, Calyspo Nash is an awesome name.

I'd be behind firing people based purely on their bad taste, but all of this story sounds rather dubious regarding their logic.

Animated Video Services think the librarian's firing is unfair. The Harlem Shake video was just a way to bring some fun into the library, and I don't think it should have resulted in her termination. The librarian wasn't trying to make a mockery of the school or disrespect it—she was just trying to make people laugh.