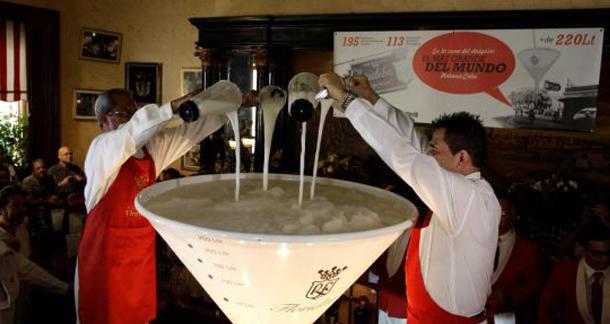 Think you had a lot to drink Saturday night? Over the weekend, bartenders at Havana's El Floridita created a massive alcoholic homage to Ernest Hemingway and his affinity for daiquiris. Waiters poured blender-fulls of daiquiri into a seven-foot-tall plastic cocktail glass that could hold a total of 71 gallons—and their cocktail just might qualify for a spot in the Guinness Book of World Records. During the rum-soaked after-party, birthday songs were sung in honor of Hemingway, who would have turned 113 on Saturday.

And during his 20-year stay in Cuba, Papa just might have consumed an equivalent amount of daiquiris. Writing about Hemingway, William Grimes of the New York Times noted that he "often worked his way through about a dozen of these lime slurpees, sometimes ordering doubles, which became known as Papa Dobles."