UPDATE: SOLD! Lena Dunham Is Seeking One Million Dollars For Her First Book 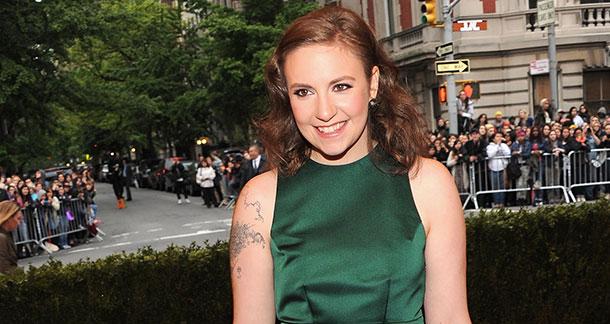 UPDATE: Sold! Dunham's book went to Random House for something north of $3.5 million dollars. Apparently the bidding war was heated, with a number of publishers vying for the book.

More from Random House, via the New York Times:

Susan Kamil, the editor-in-chief and publisher of Random House, confirmed the acquisition on Monday, saying in a statement, “We’re thrilled to welcome Lena to Random House. Her skill on the page as a writer is remarkable — fresh, wise, so assured. She is that rare literary talent that will only grow from strength to strength and we look forward to helping her build a long career as an author.”

Random House described the book as “in the tradition of Helen Gurley Brown, David Sedaris, and Nora Ephron,” offering “frank and funny advice on everything from sex to eating to traveling to work.”

As expected, this has caused quite a bit of consternation in the literary world. Lots of people saying she doesn't deserve it or that it's indicative of a negative trend in the publishing industry, lots of other people saying to calm down and go concentrate on your own life. What say you?

Film and television prodigy Lena Dunham is looking to expand beyond the her respective screens. The star, writer and creator of HBO's hit show Girls is shopping a proposal for Not That Kind Of Girl: Advice by Lena Dunham. Basically, it's a collection of essays about sex, friendship, work, eating disorders and various other feminine issues, told with her well-known self-depreciating sense of humor. According to Slate, the price her agents are asking is one million dollars.

You've read right. She's asking one million dollars for a proposal, which means the book is not even written yet. Dunham's already suffered an impressive amount of criticism for both her series and her origins (she is the daughter of Laurie Simmons, famed American photographer), so this announcement almost guarantees more vitriol from her detractors. Many career authors are going to wince at her asking price.

I'm quite the fan of Girls, and as long as the book's good, if she can get whatever she can for it, then I'm all for it. I'm sure the writing will be better than most books written by authors with half her talen and who got paid quite a lot (looking at you, 50 Shades). Of course it's a high asking price, but that shouldn"t detract from if the book will be good or not.

Unsure. Being a tv writer/creator is far different from writing for books. I'll need to watch her show to be better informed but I think that's a very large sum for an unproved writer for print.   As D Brophy has intimated, it's GOT to be better than that 50 Shades travesty.

The fact that a celebrity received big money for a book isn't bothersome to me at all. Dunham DEMANDING a million bones for a book she hasn't written yet though. Ugh. I don't know.

Basically, it's a collection of essays about sex, friendship, work, eating disorders and various other feminine issues, told with her well-known self-depreciating sense of humor.

Living proof that anyone can make it as long as they have talent, dedication, and a famous mother who's part of New York's artistic community.

I don't get what her being the daughter of a famous artist has to do with anything. I keep hearing people complain about that. So what? Nobody knew who her mom was when she hit it big and nobody knows right now who her mom is. Does Dunham lose her credibility just because her mom's "famous"? Girls is a great show, i don't give a damn how realistic it is or isn't.

She'll probably get it. Assuming a publisher thinks her name/show can carry the sales. I'm not familiar with the show, because I don't have cable :-/

I can't see the million dollar price tag working out, but it will serve her and her future publisher well if everyone involved lies and says they actually paid her that amount. Will result in more sales.

I like her Frank Gehry tattoo. What the hell is that thing?

EDIT --- It's a cute cow sitting in some flowers, and I feel bad.

Many career authors will wince at her asking price, but put them in her position — that is, more likely to get her way than most career authors — and they will be winced at in turn.

Brandon, you got me cracking up. I was thinking about it guys. I'd have no problem if I've learned that Vince Gilligan or David Simon received the same advance from a publisher. So maybe this is cool.

She asked for 1 million and got 3.5 million. Apparently, I am doing this whole asking for a raise thing incorrectly.

David Simon is already very much a proven author.

I love Girls, love Lena's wit, and say good for her. I'm not a big fan of mumblecore in general, but she created that show, writes it, and wrote her feature film debut before that, too. One of the most endearing things about her, I find, is having success in this culture despite not being particularly attractive. She's relatable, not some bimbo.

As for the famous parent example, see: Sofia Coppola. I cannot identify one bit with her ennui. And people I know who've worked with her say she's a total hack/princess.

scribble some essays about your va jay jay and your a cash money millionaire... that's the formula? child puh-leeease

Devon Robbins from Utah is reading The Least Of My Scars by Stephen Graham Jones October 9, 2012 - 10:02pm

I think that it's awesome. Good for her, being able to keep the ball in her court.

Ah sexism! Combined with mild envy and internet access, you are so hot!